Written by Jenny Marrs on November 29, 2022. Posted in Fixer to Fabulous.

We’ve known the Powers family for several years. I first met Jennifer when she started her business, Dream Big Tents, and set up a sleepover party for the girls. Since, she has been a staple at our birthday parties and we have gotten to know their family between birthdays and cross country meets. Mike and Jennifer met when they were both collegiate athletes at the University of Arkansas. She played volleyball and he was a runner. After college, Mike went on to represent Australia in the Sydney Olympics. Today, they have the sweetest family with three kids: a 12-year-old boy and two girls ages 9 and 6.

Their style reflects a modern Australian vibe, so we decided to lean into that with their remodel. Throughout the house we kept it minimalistic with straight lines, light earthy tones and natural elements. 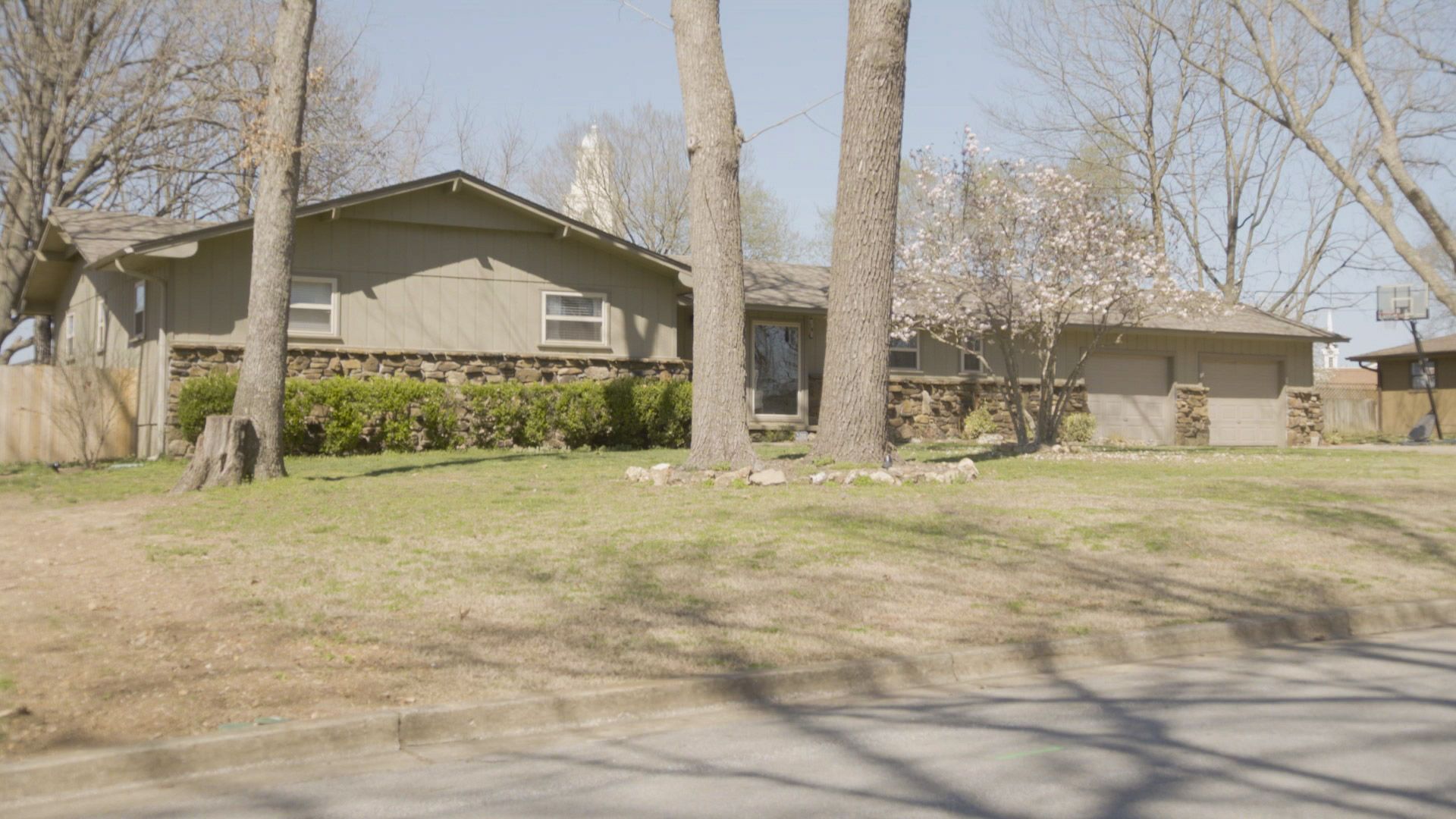 Dave and I love a front porch, and what the Powers family had in front of their house was anything but a front porch! Without proper roof drainage, rain had hammered the front of the house over time and caused water damage. The support beam and concrete outside the front door were completely ruined. The area was pretty small to begin with so we knew right off the bat that a true front porch would transform the exterior of this home.

The exterior paint and landscaping could also use a refresh. We were happy that Jennifer and Mike were open to letting us make some big changes here.

For the exterior, we decided to go with a charcoal paint color. It’s a softer alternative to a modern black. We also added new landscaping, including a water feature provided by the landscaper. Jennifer and Mike love the sleek front door we picked out. It’s a simple but beautiful statement piece. The best part, of course, is the fabulous new front porch. We got rid of the old cement floor and poured new concrete for a bigger, more stable area. It turned out to be about three times the previous size. The roofline was a bit tricky, but Dave was able to cut away a portion of the original roof and add a new awning. He finished it off with stained car siding underneath to bring contrast and warmth to their new covered porch. 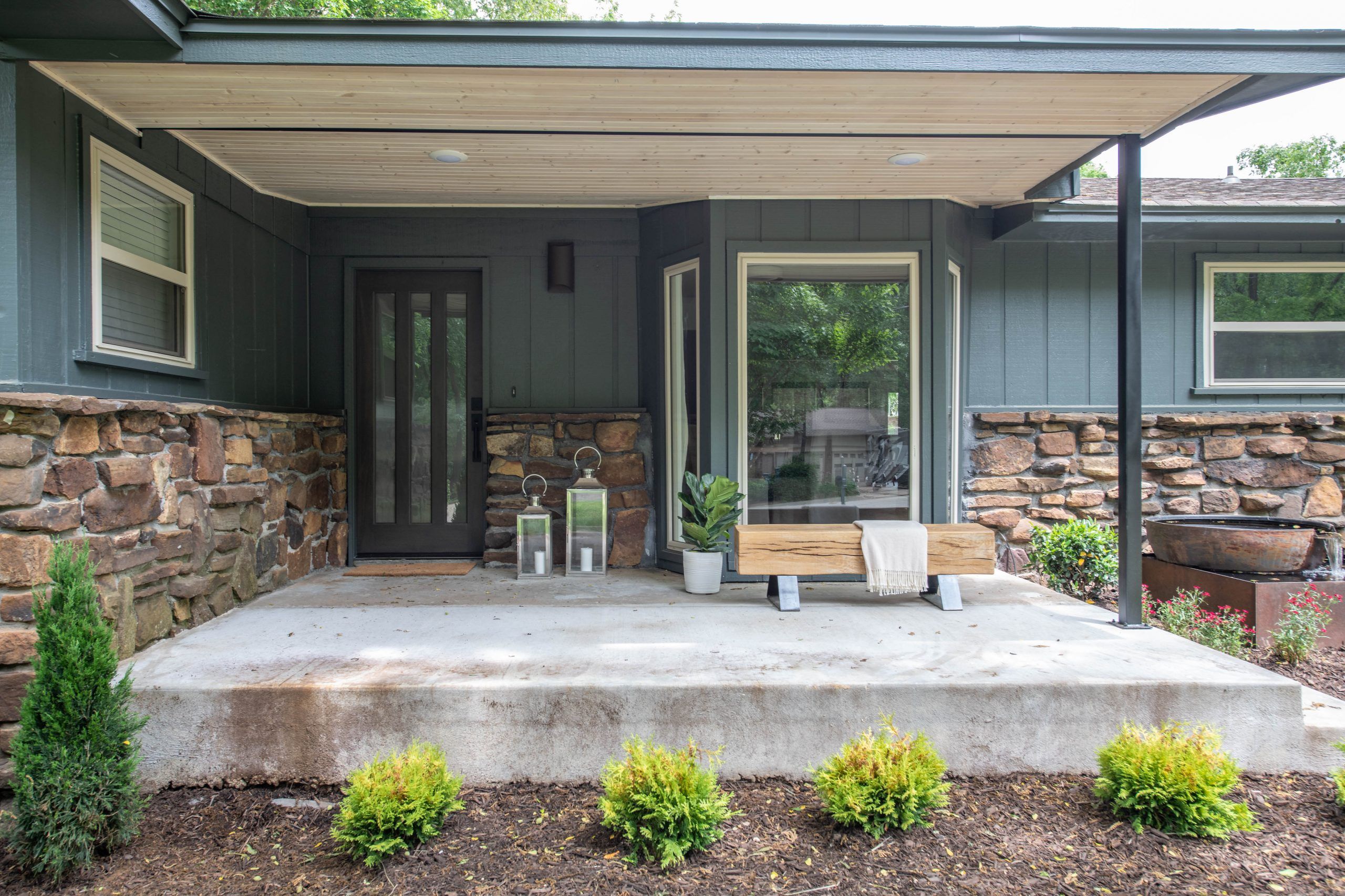 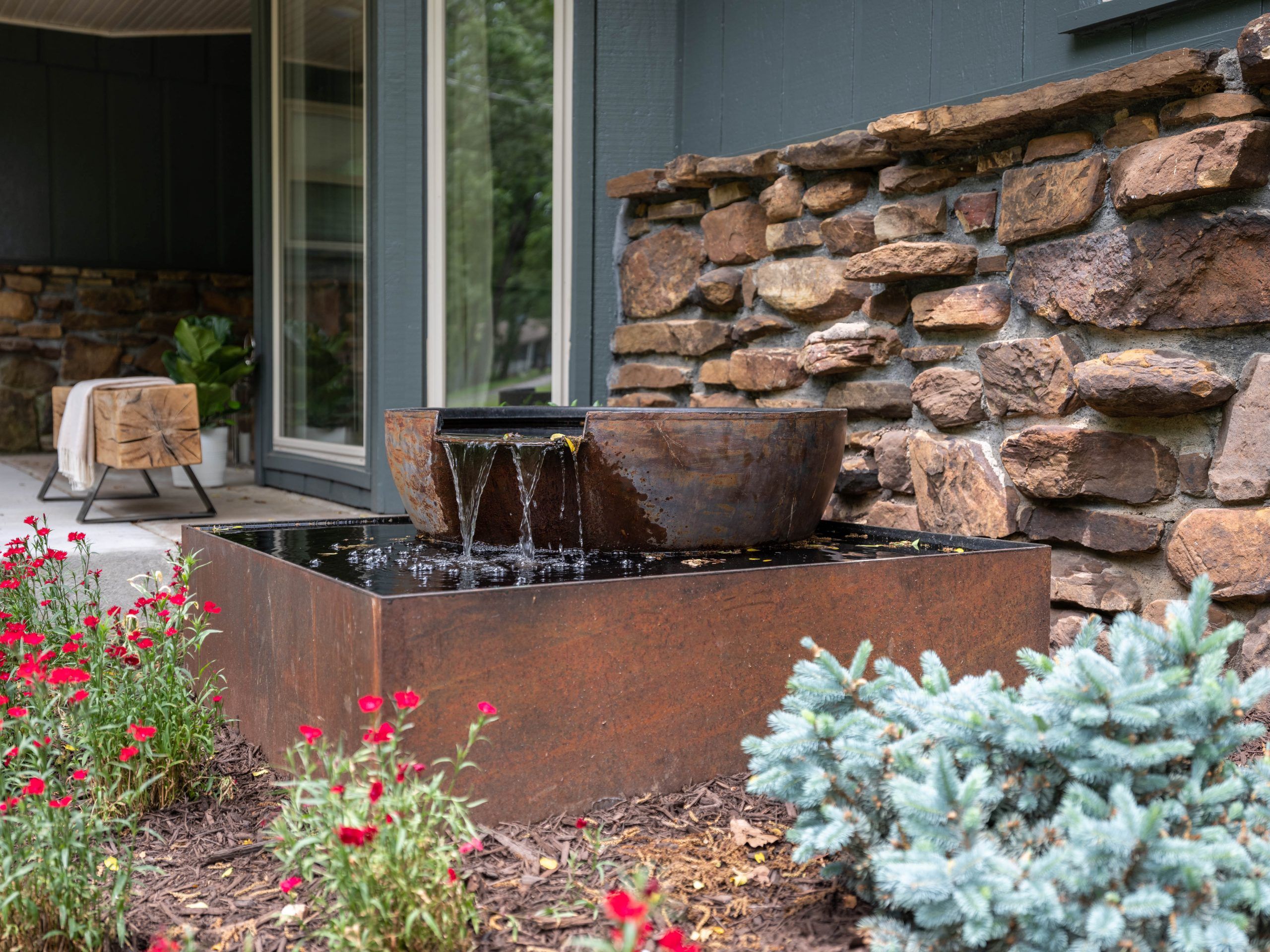 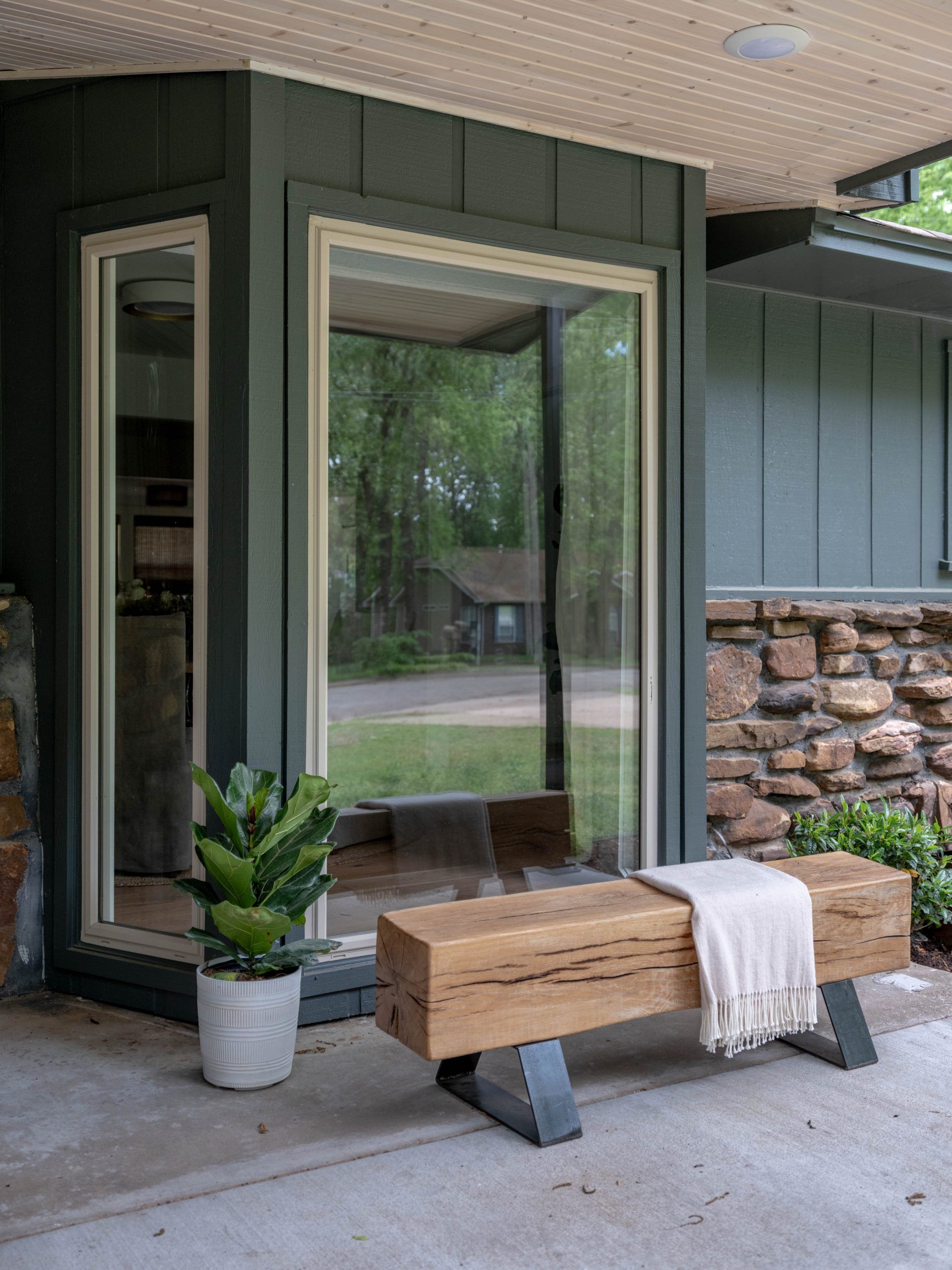 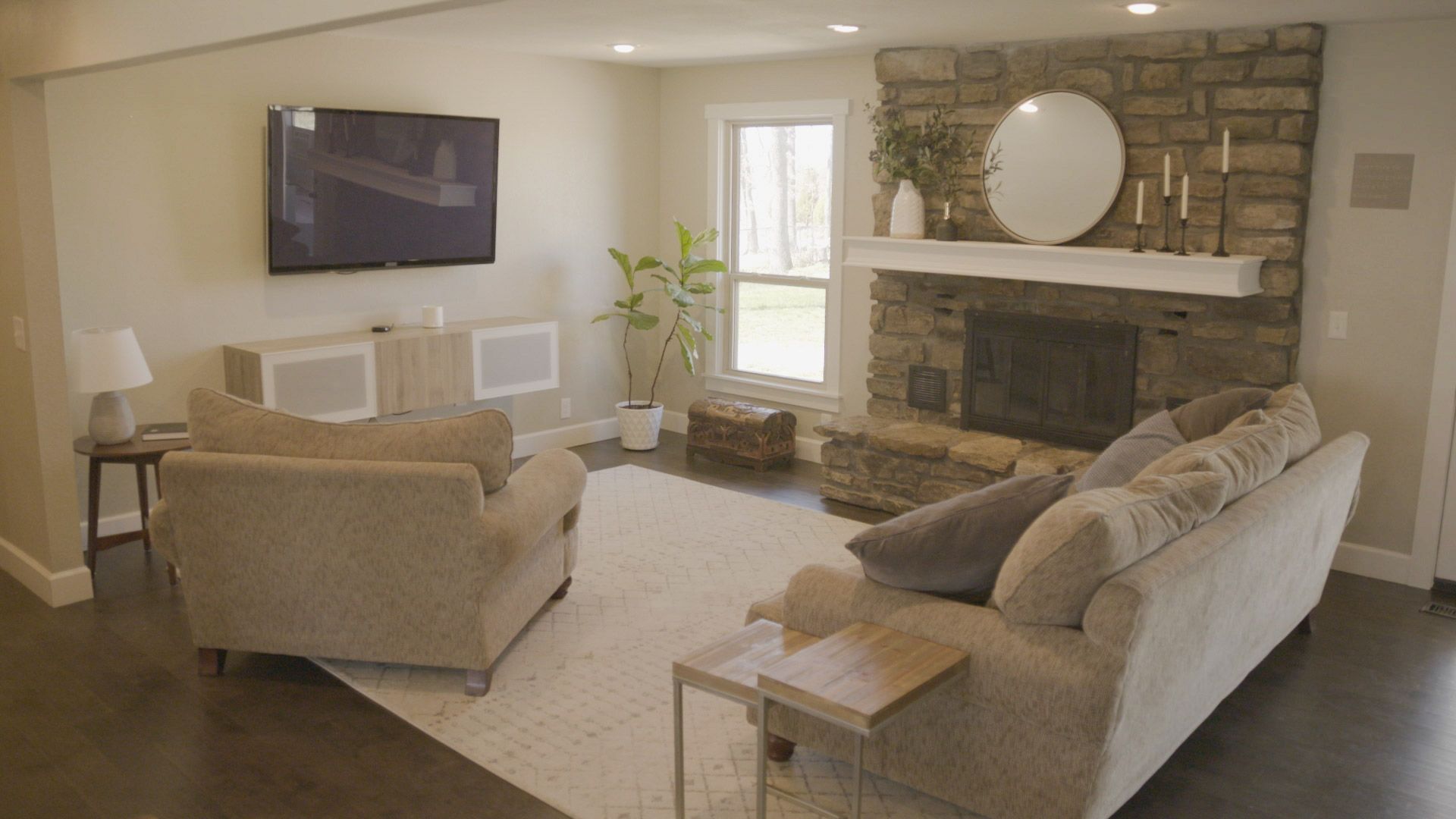 The original focal point of the living room was an obtrusive stone fireplace that took over the majority of the main wall. It didn’t match the Powers’ sleek minimalistic style nor the look they were going for. This turned out to be quite a project. First, we removed the hearth that was sticking out too far. Then, we covered the majority of the fireplace with concrete mortar, leaving the stone around the firebox exposed so that it provided a natural contrast. I love how it turned out to look like something you might find in an olde world home but also feels modern and minimalistic.

Since we took away their son’s gaming area from the sunroom, we set up a fun surprise for him using the extra closet off the living room. I knew my own boys would love this and now they’ve asked to convert the closet in their bedroom into a gaming room. 🙂 There’s nothing more fun for a kid than a secret hiding space. We set it up all cozy inside with a mounted TV, beanbag chair and a custom-made gamer neon sign. The secret room is hidden by custom built-in shelving along the living room wall. 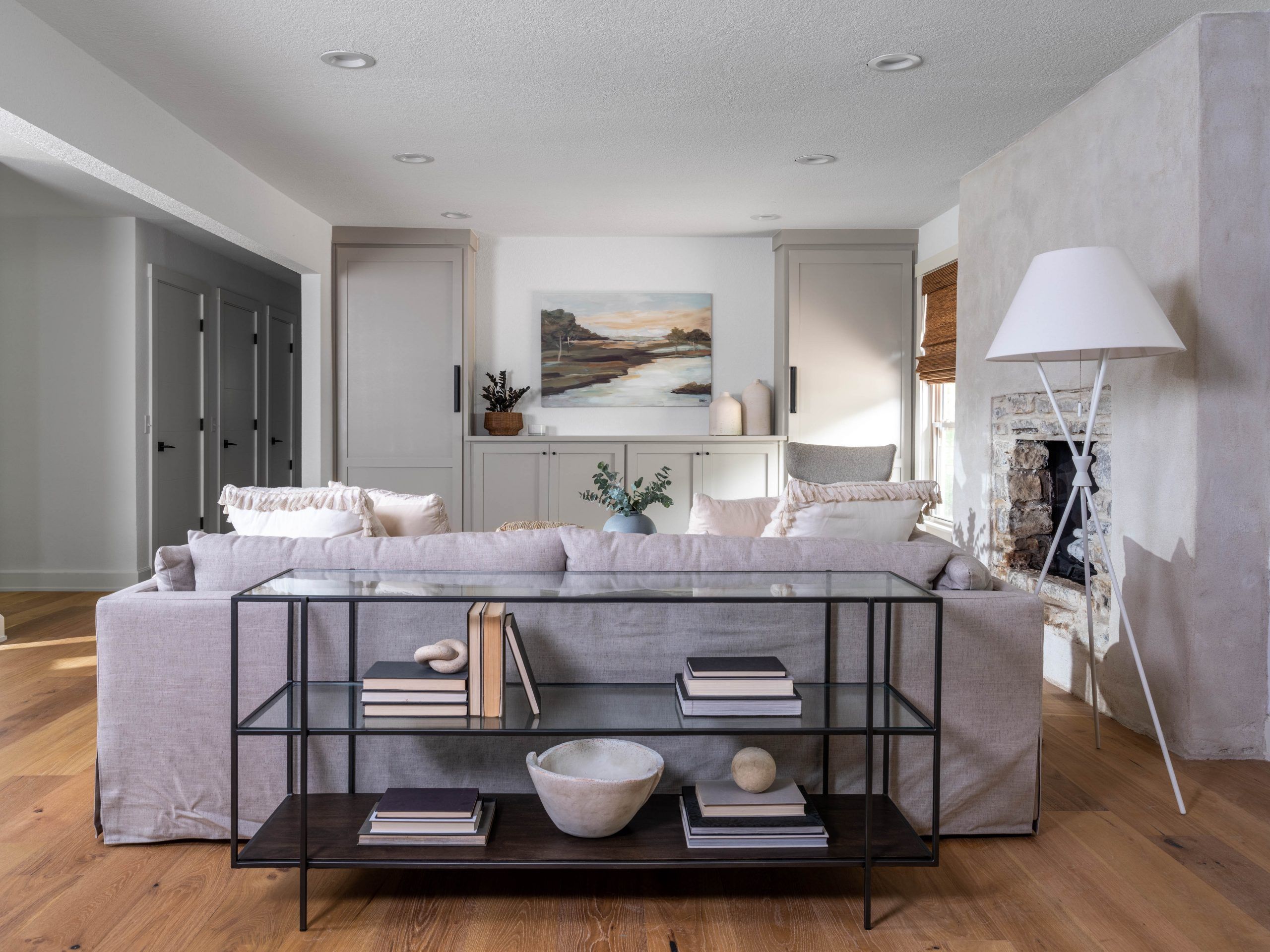 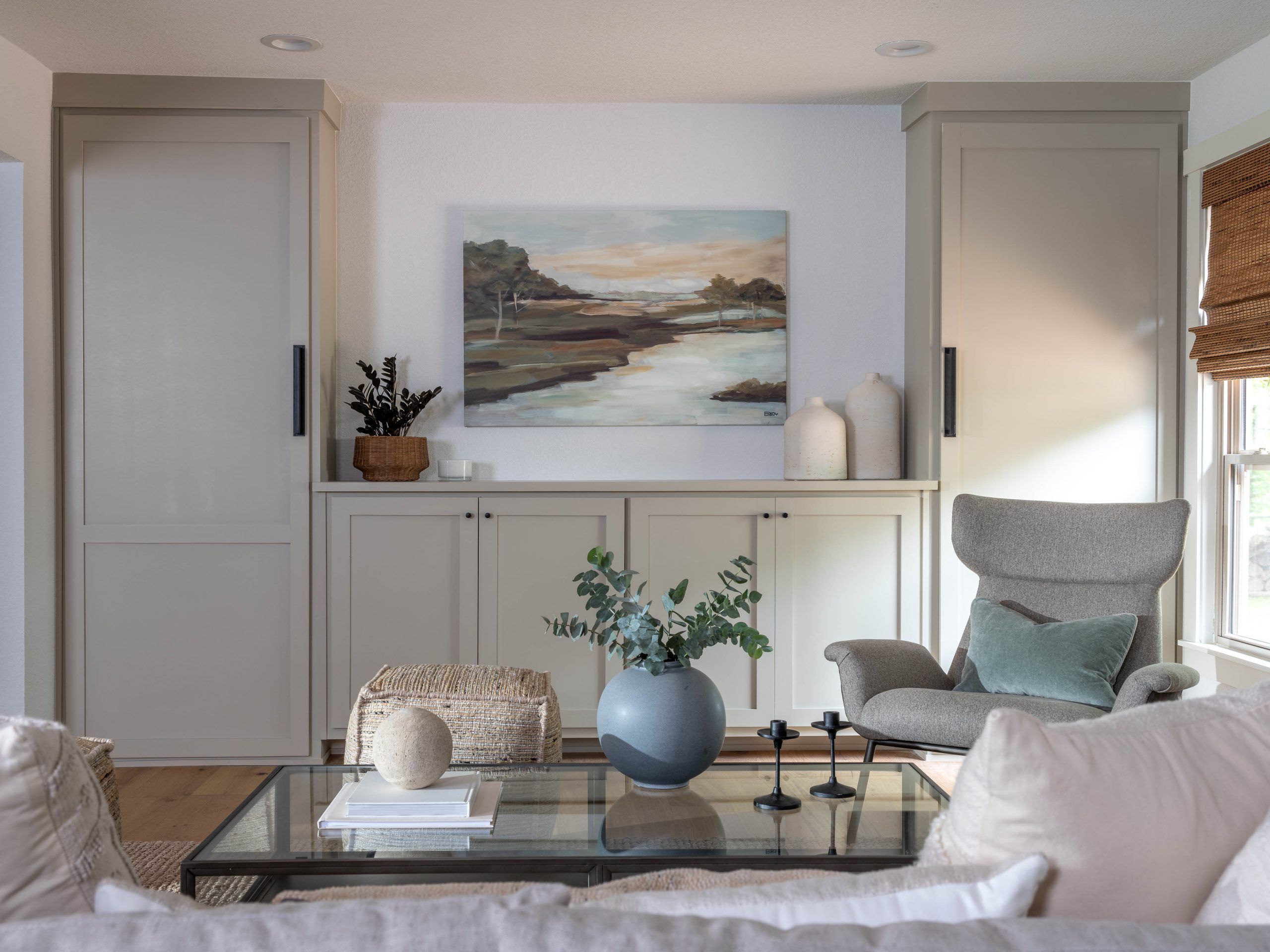 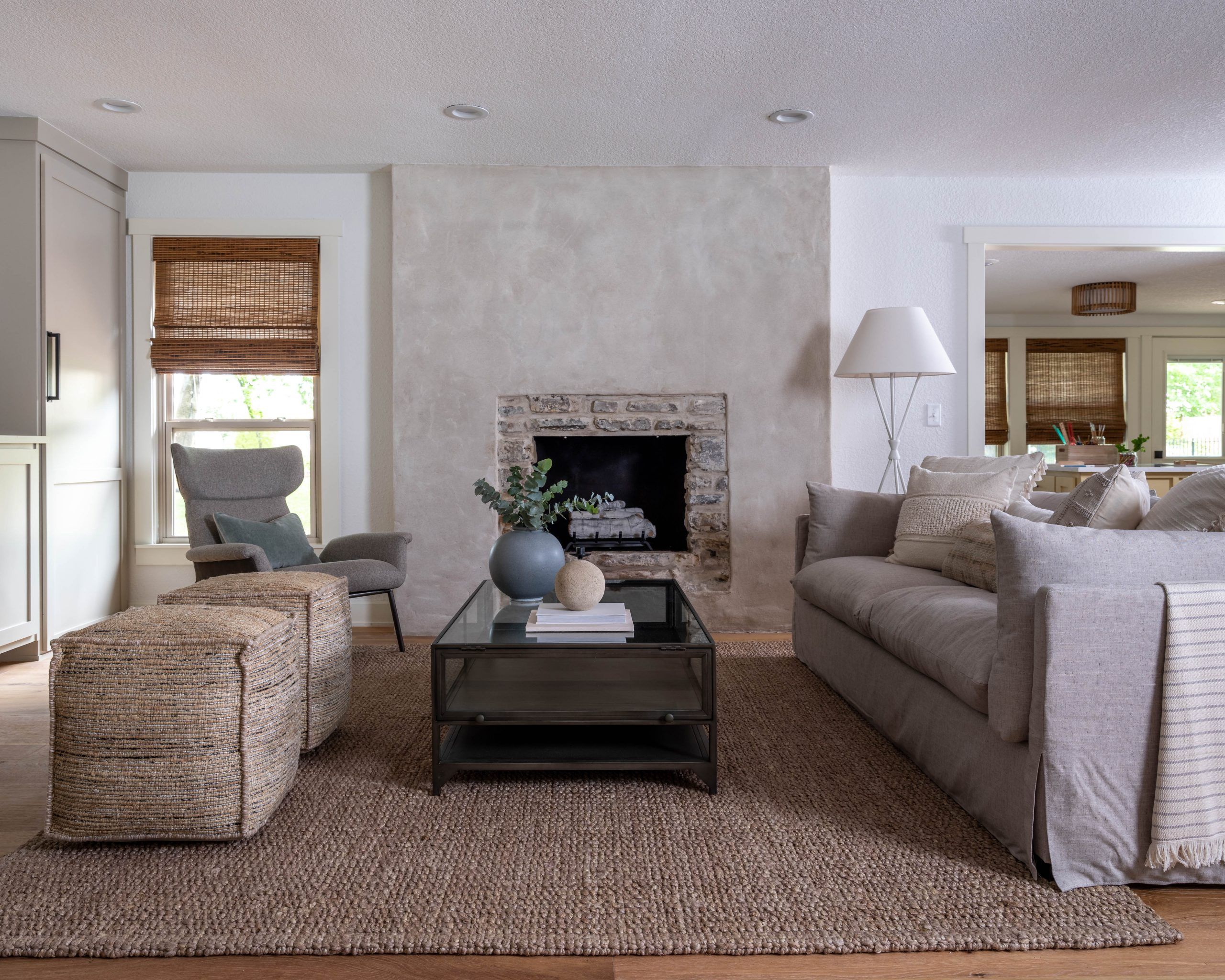 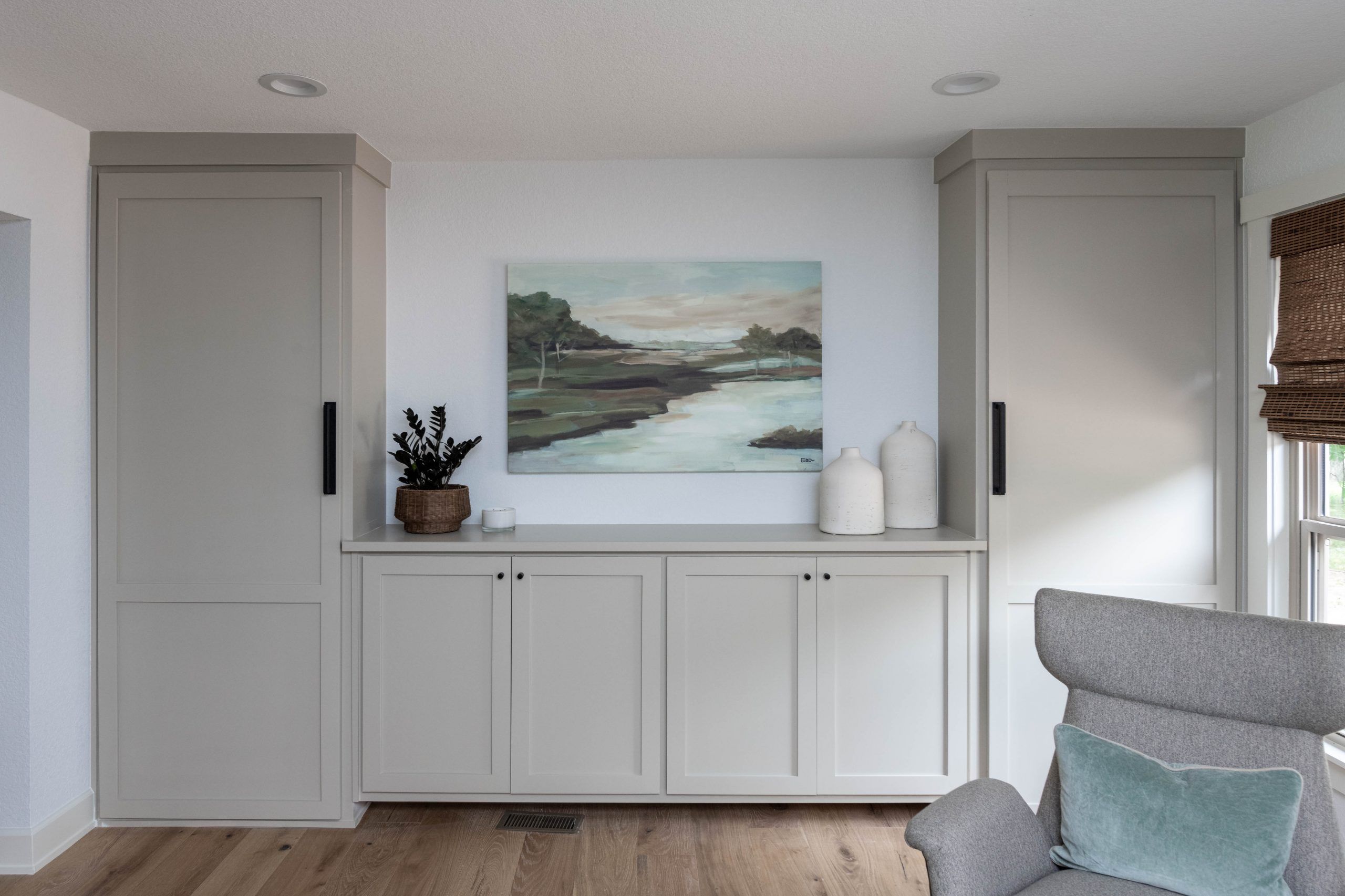 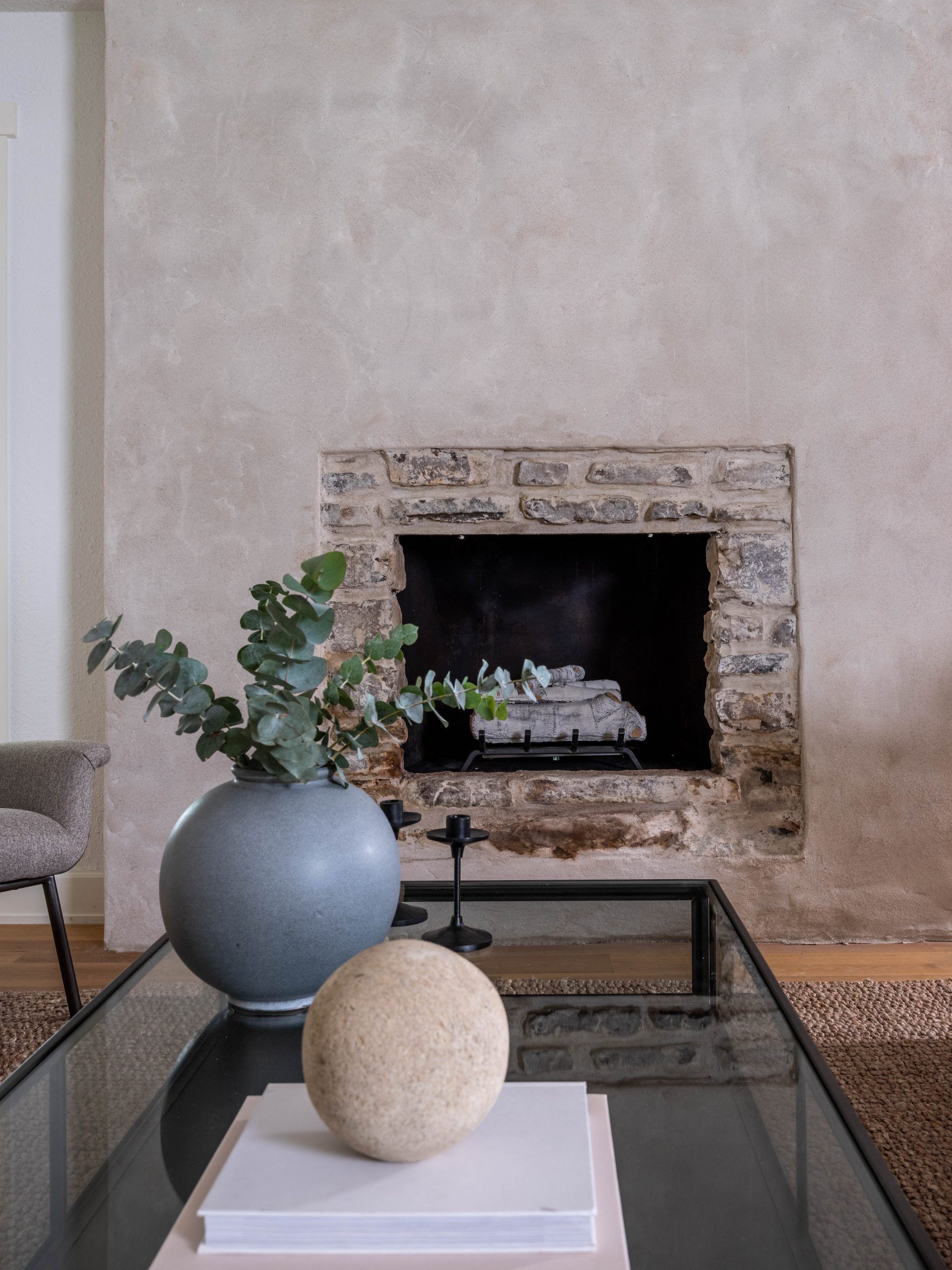 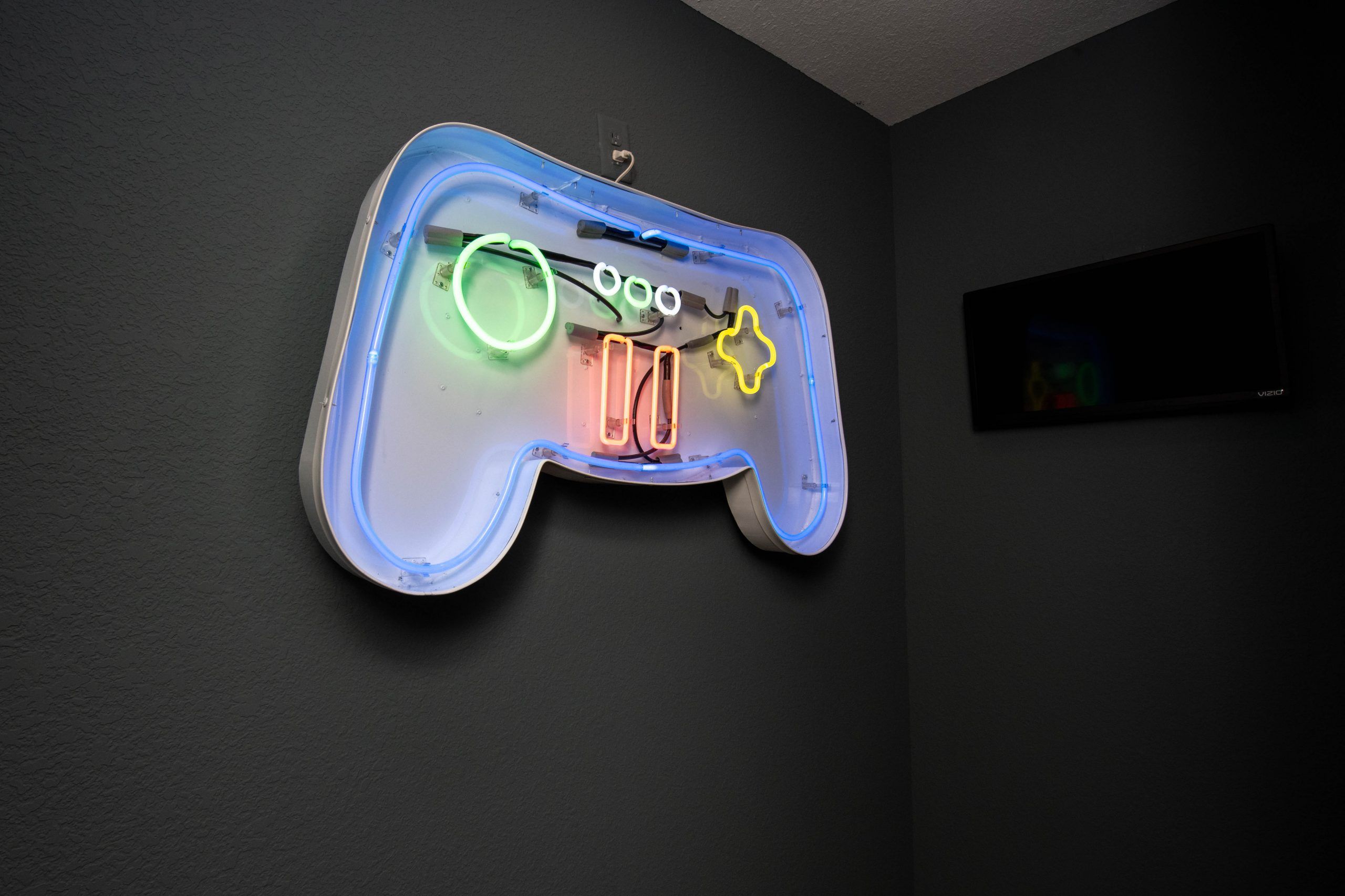 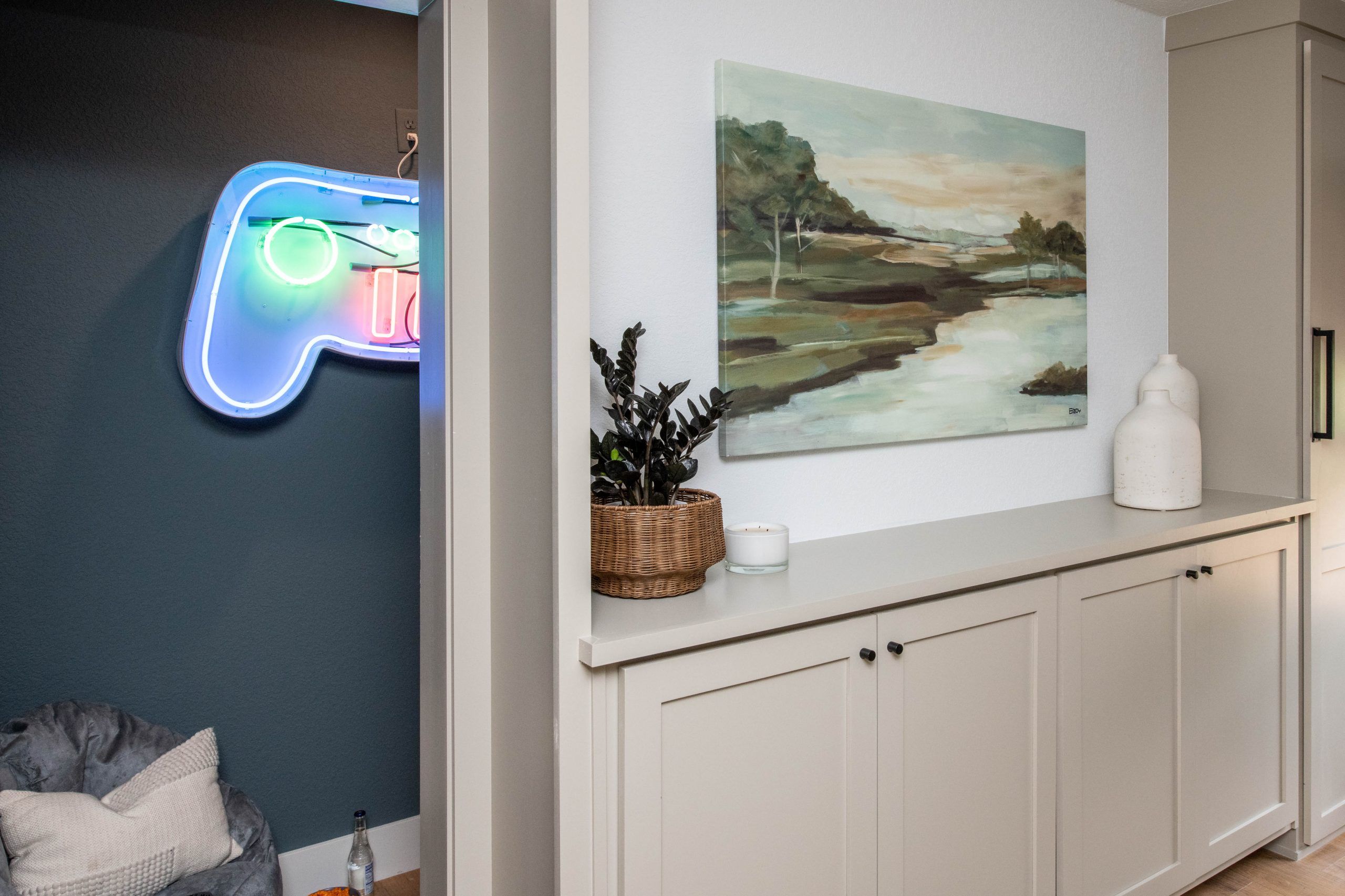 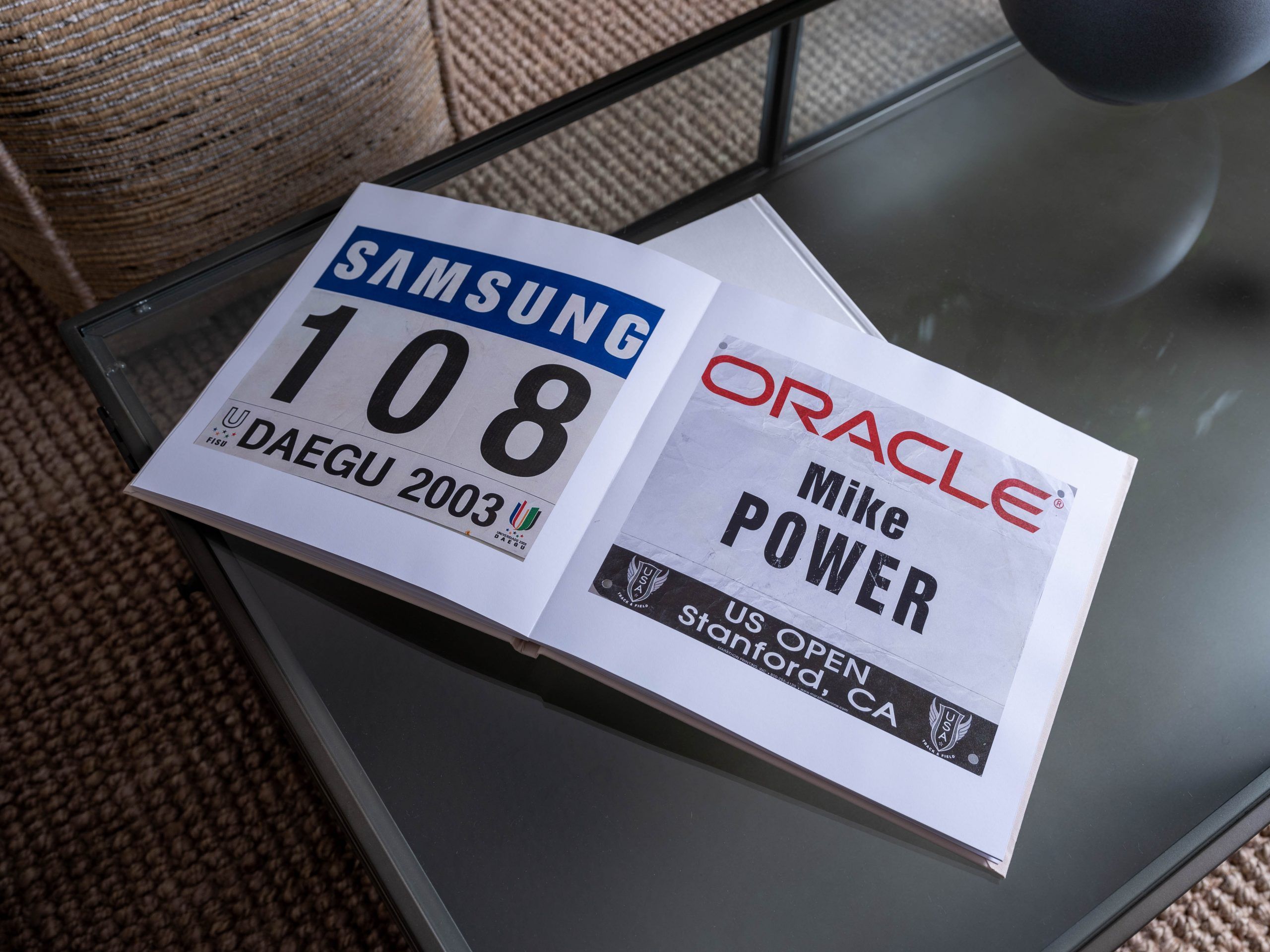 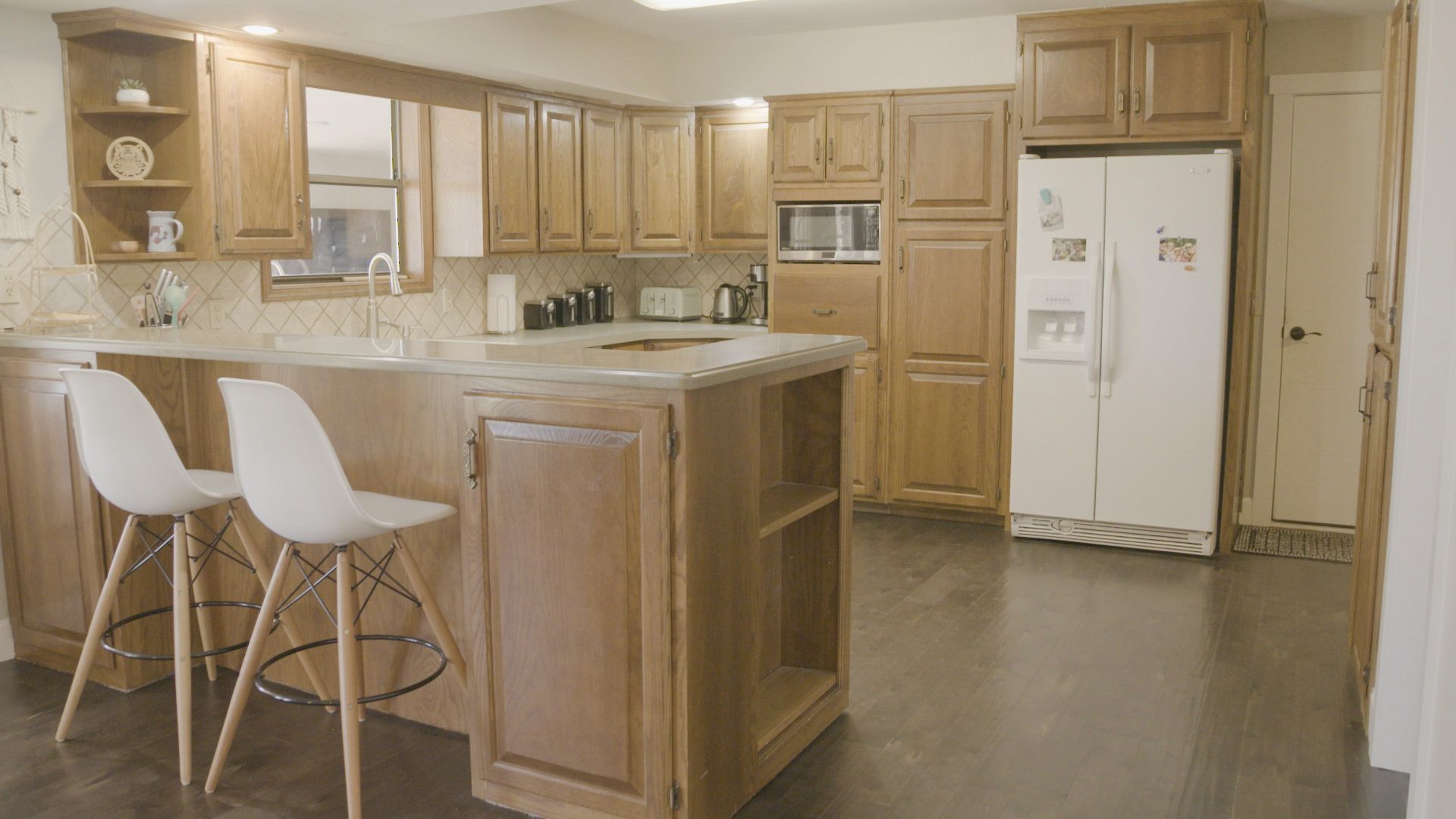 The Powers’ kitchen was a good size, but it was dark and dated. Mike mentioned his English heritage and his love for tea, which basically gave me permission to unleash my (not entirely suppressed) inner British alter ego. This was so fun! We gave them a tea station with a built-in instant hot water faucet and then tucked it in behind a rolling cabinet door.

For the cabinets, I chose a soft shade of blue gray to brighten up the kitchen. The glazed backsplash tile looks handmade and provides a soft contrast against the quartz counters. Plus, the subtle look of the tile also allows the cabinet color to pop. 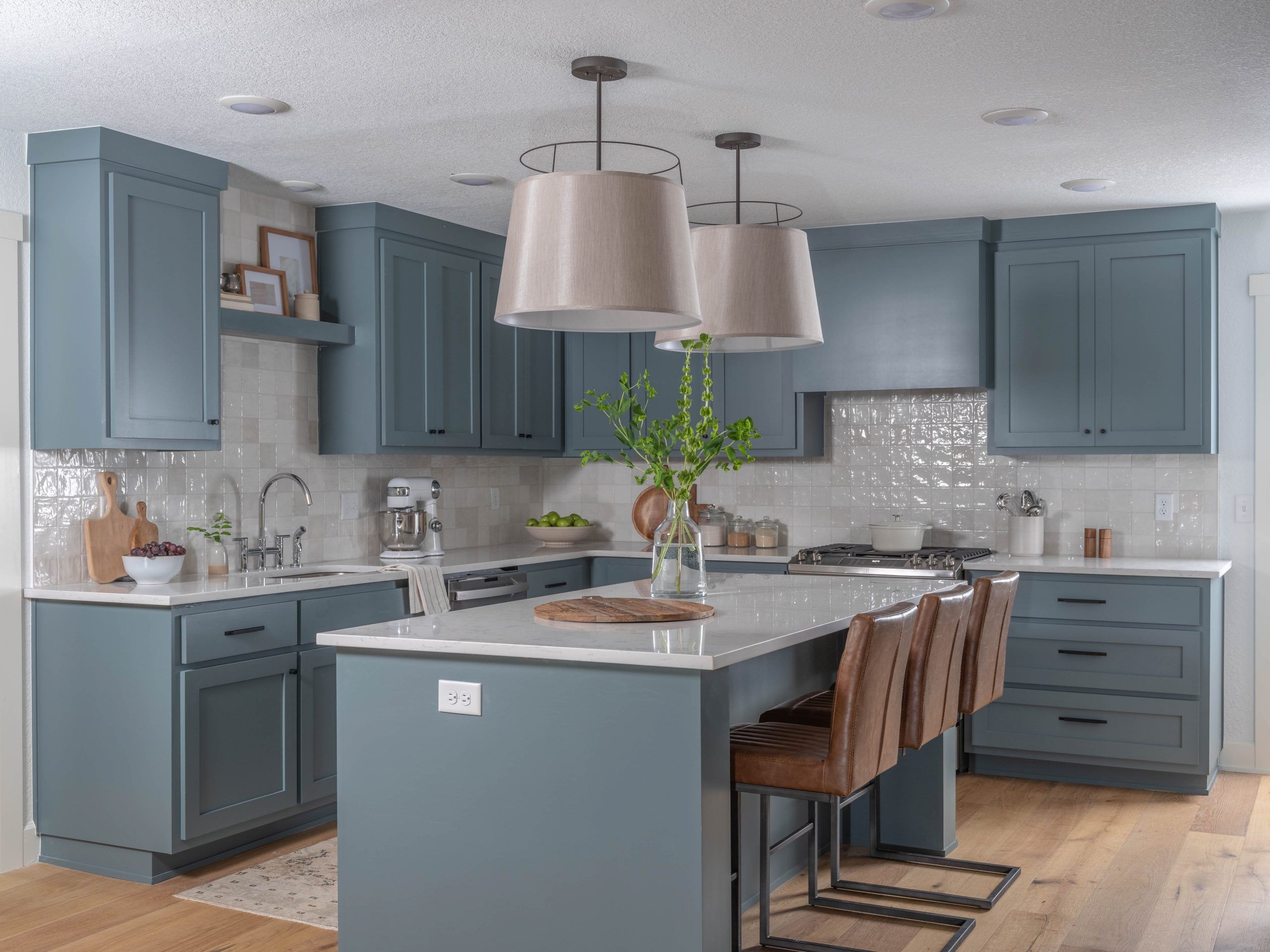 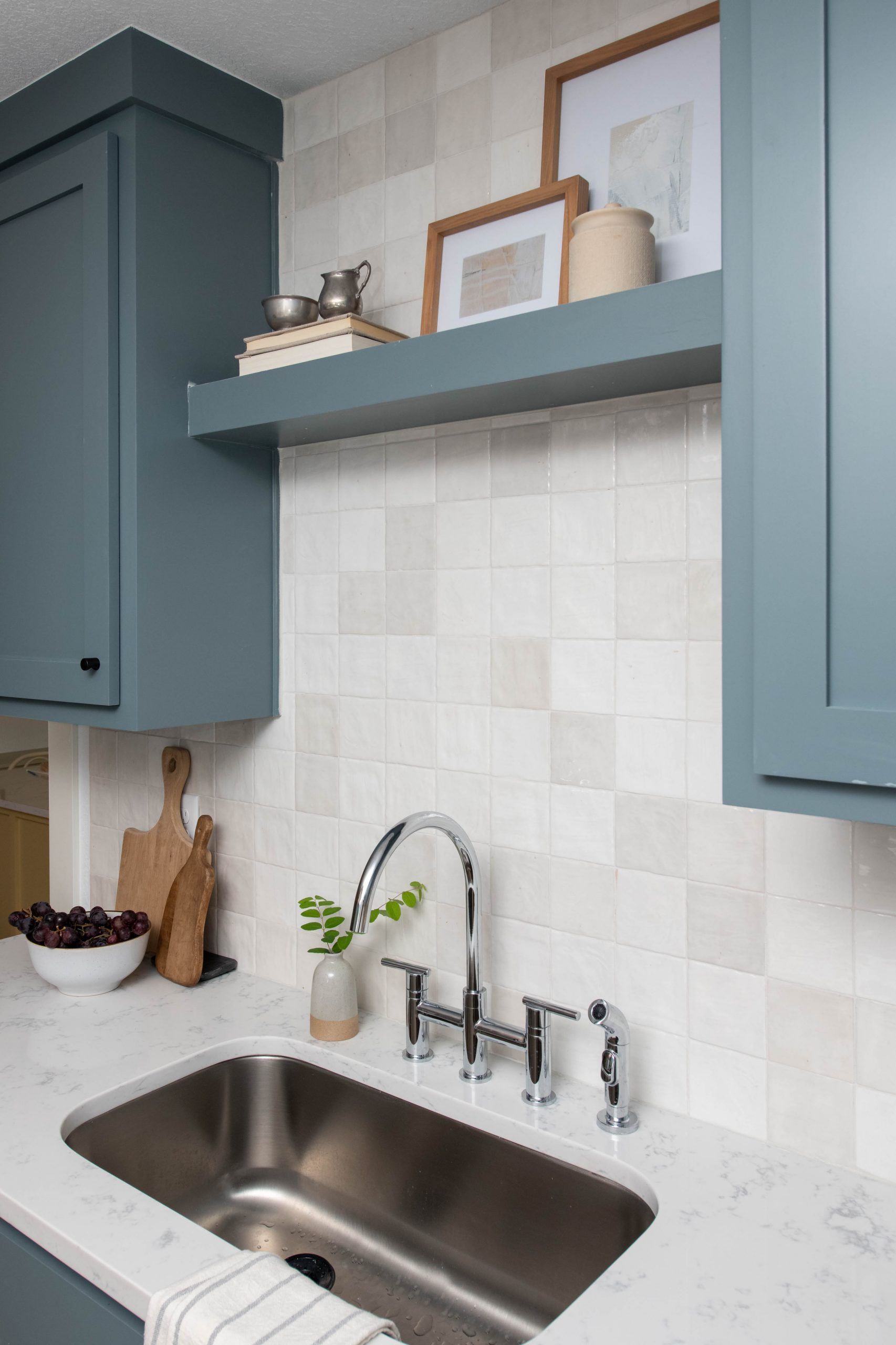 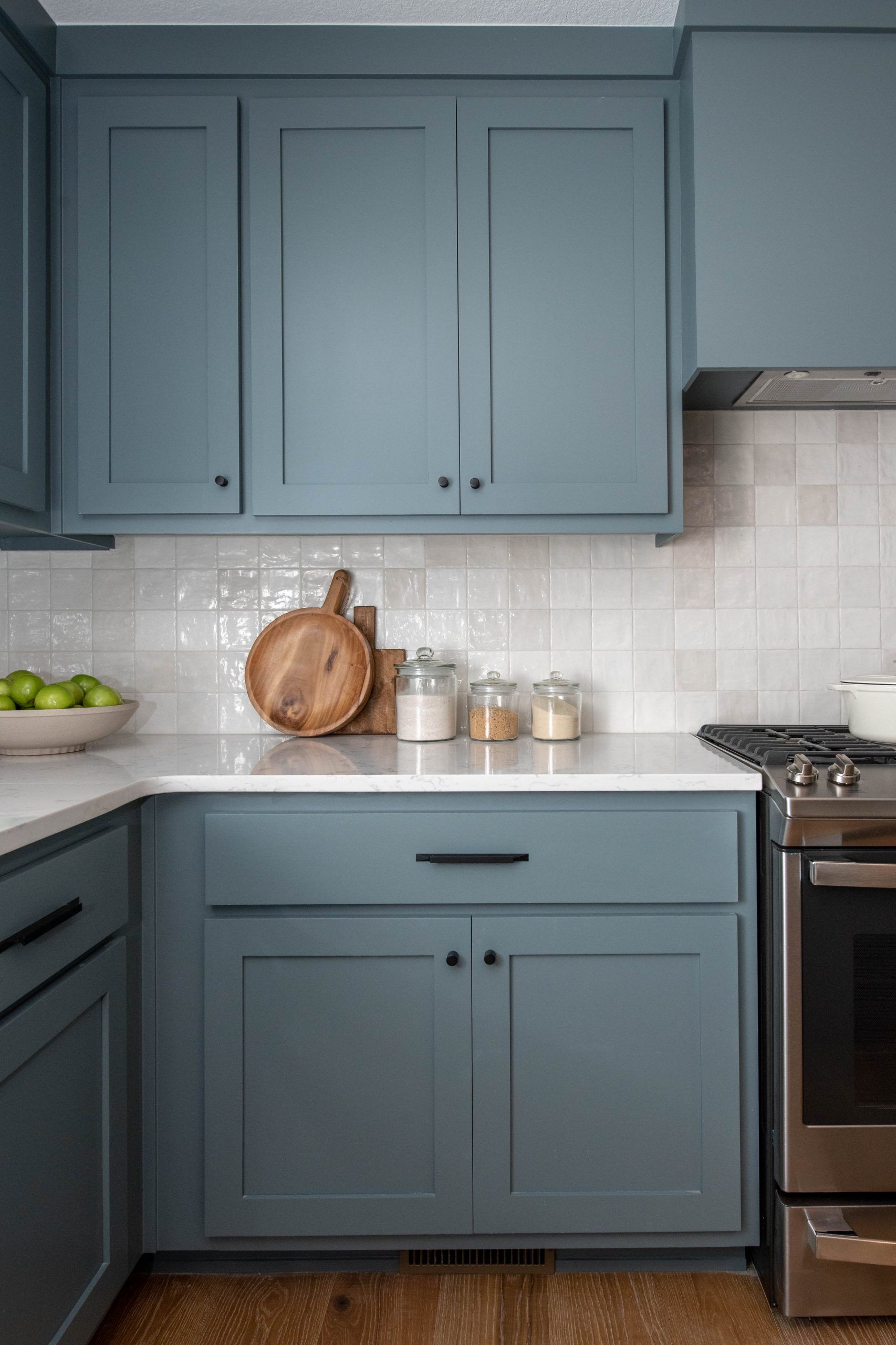 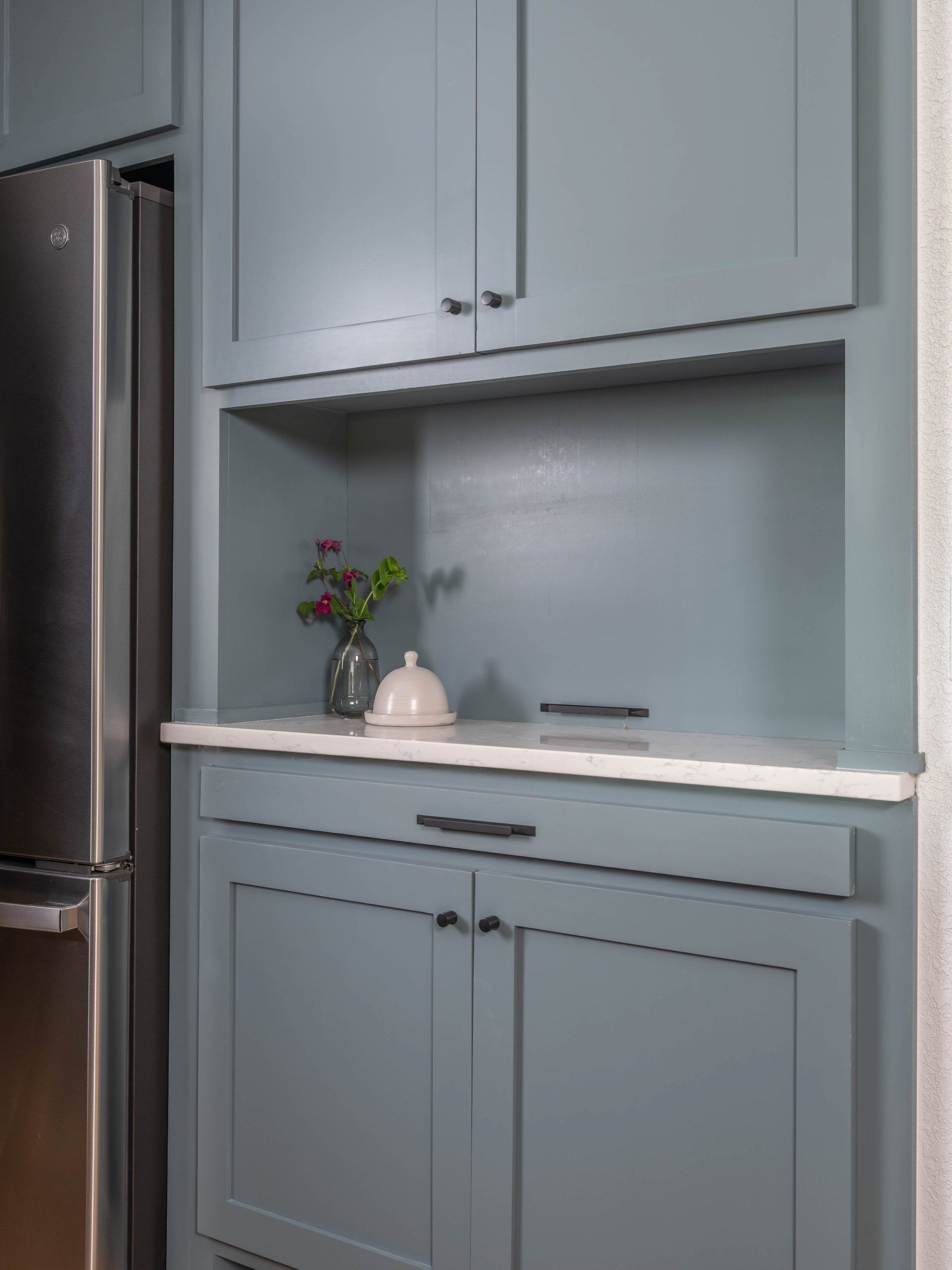 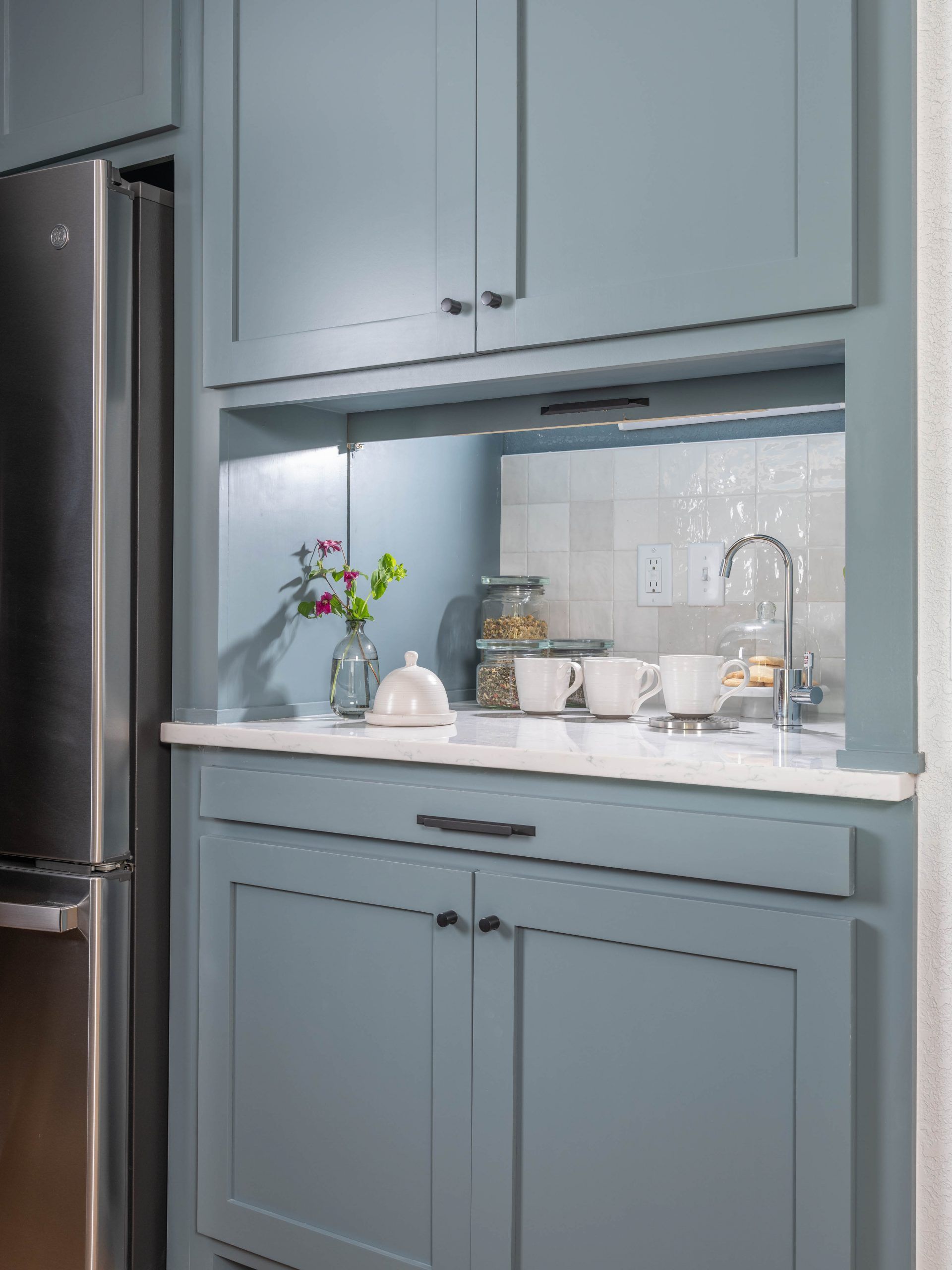 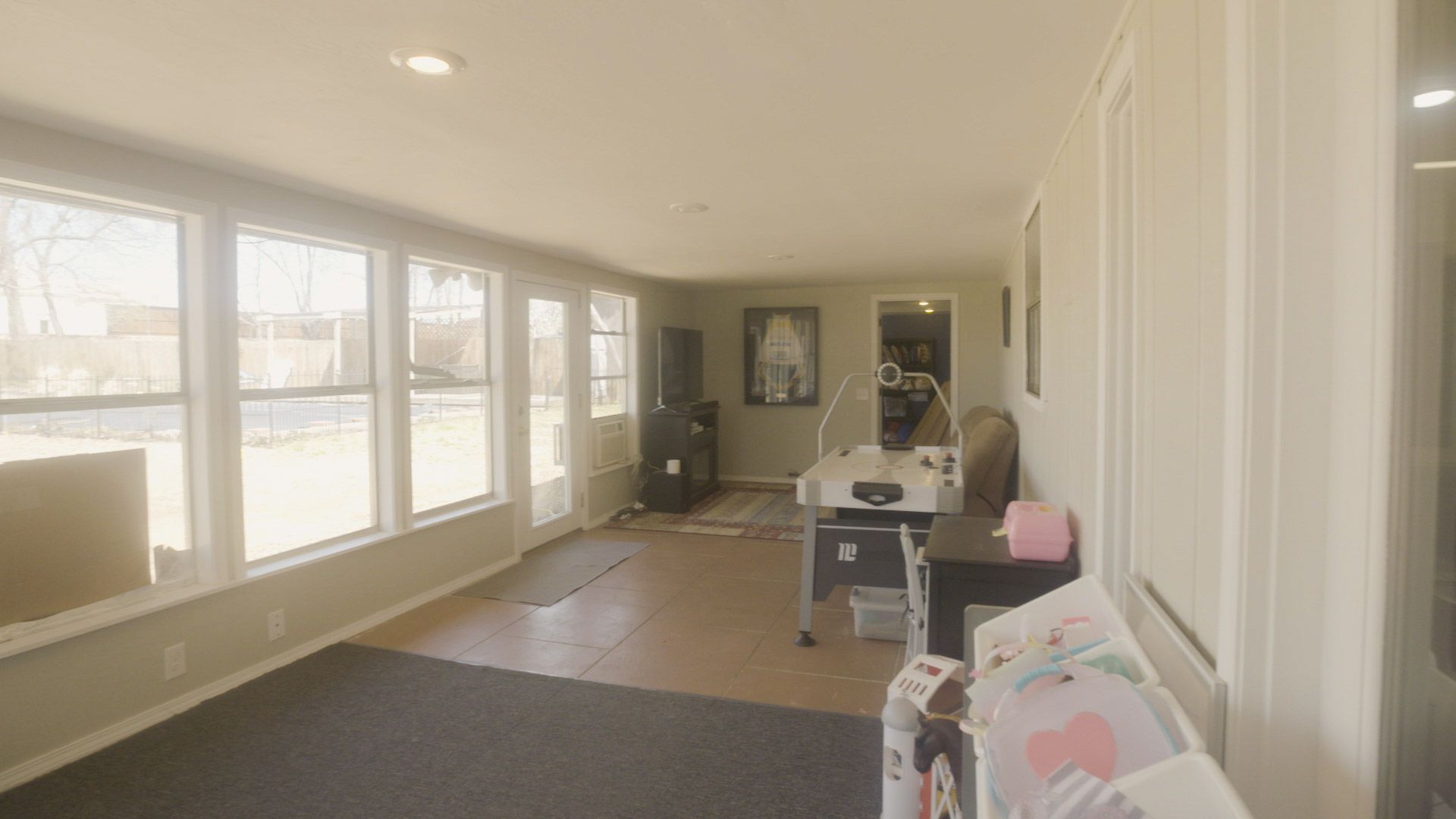 The Powers had a great idea to steal a few feet from the garage, some of the sunroom and a storage room to create a main suite on the opposite side of the house from the kid’s rooms. We carried the modern Australian home style into their room by continuing with straight lines and earthy tones. Dave added cedar slats to one of the walls to create a feature wall with a natural element.

To continue the serene Australian vibe into the master bathroom, I chose blue tile in the standalone shower. The beautiful blue tone invokes a subtle beach feel. We also had plenty of space to put in a large walk-in closet which Jennifer and Mike weren’t expecting. 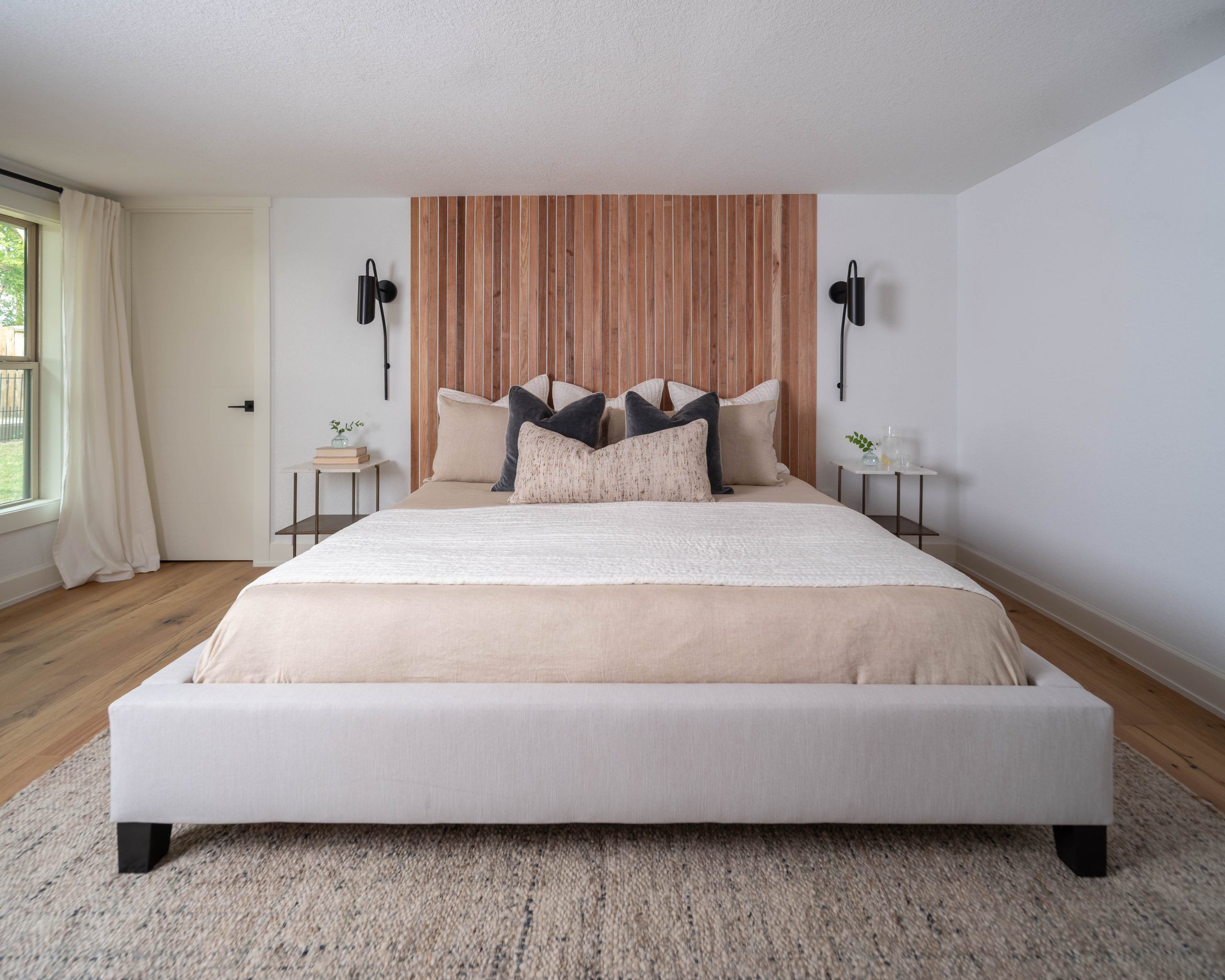 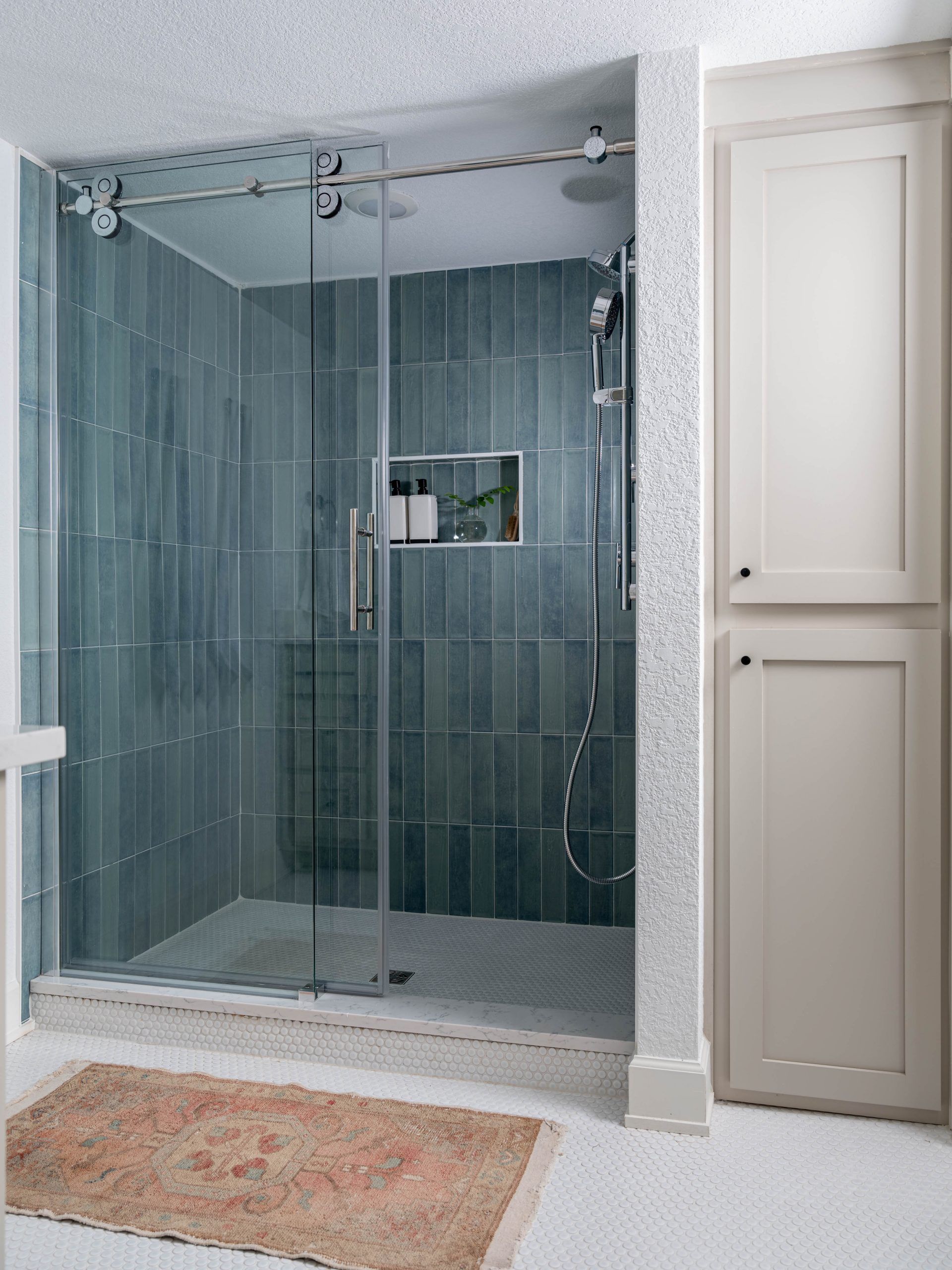 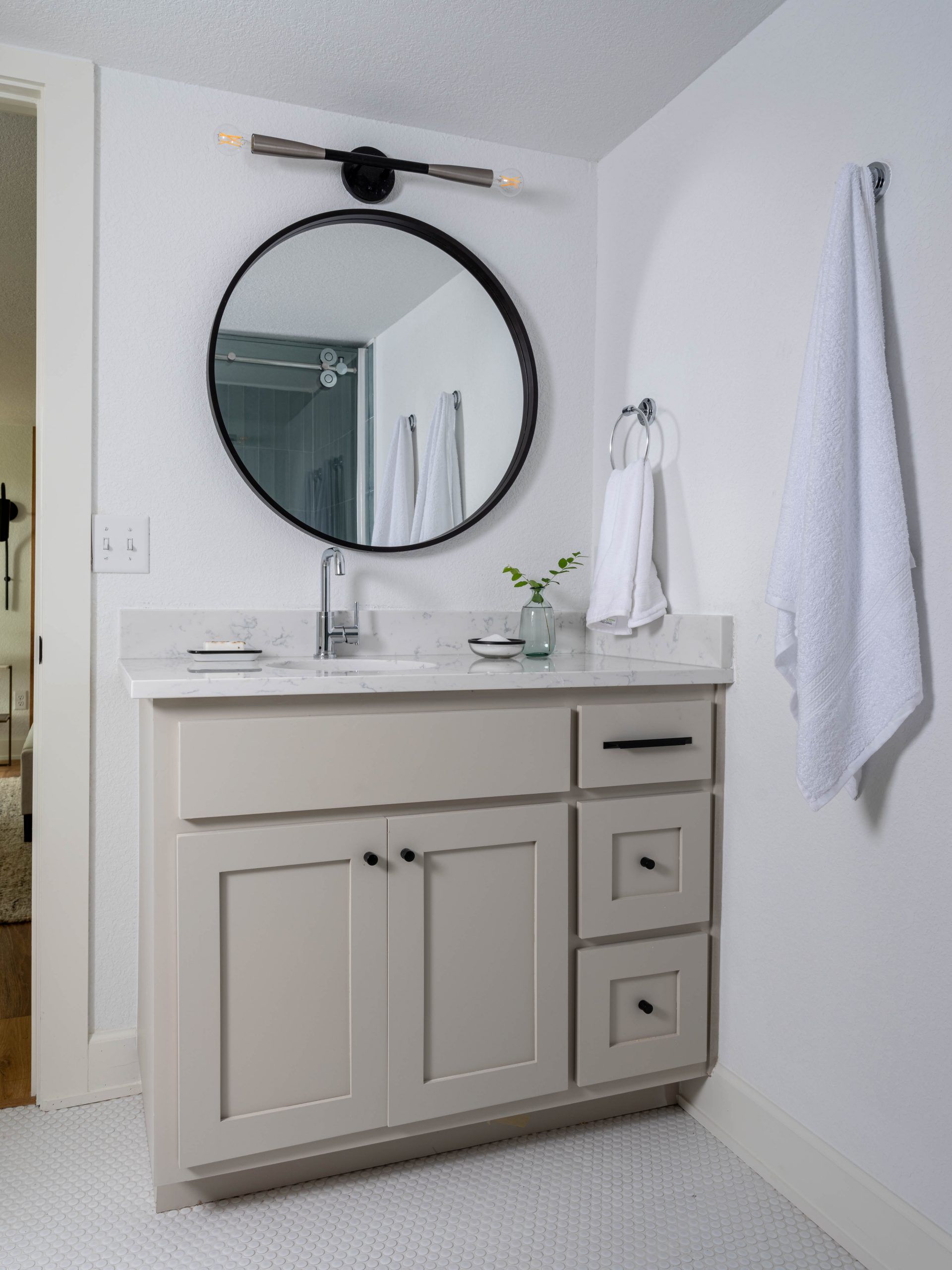 The old sunroom wasn’t very functional since it wasn’t heated and couldn’t be comfortably used year-round. It also cut off the flow of the house. We decided to embrace this space as a part of the main house by opening up the walls that led from the kitchen and living room to this area. We continued the new flooring into the area and replaced the windows. Now, it’s the perfect place for the girls to work on their crafts. Dave built a large rolling island with cabinets for storing all their supplies. When they need to move the piece out of the way, it can easily roll into a corner. The girls love their large, refreshed and bright multifunctional room that can transition with them as they grow and their interests change. 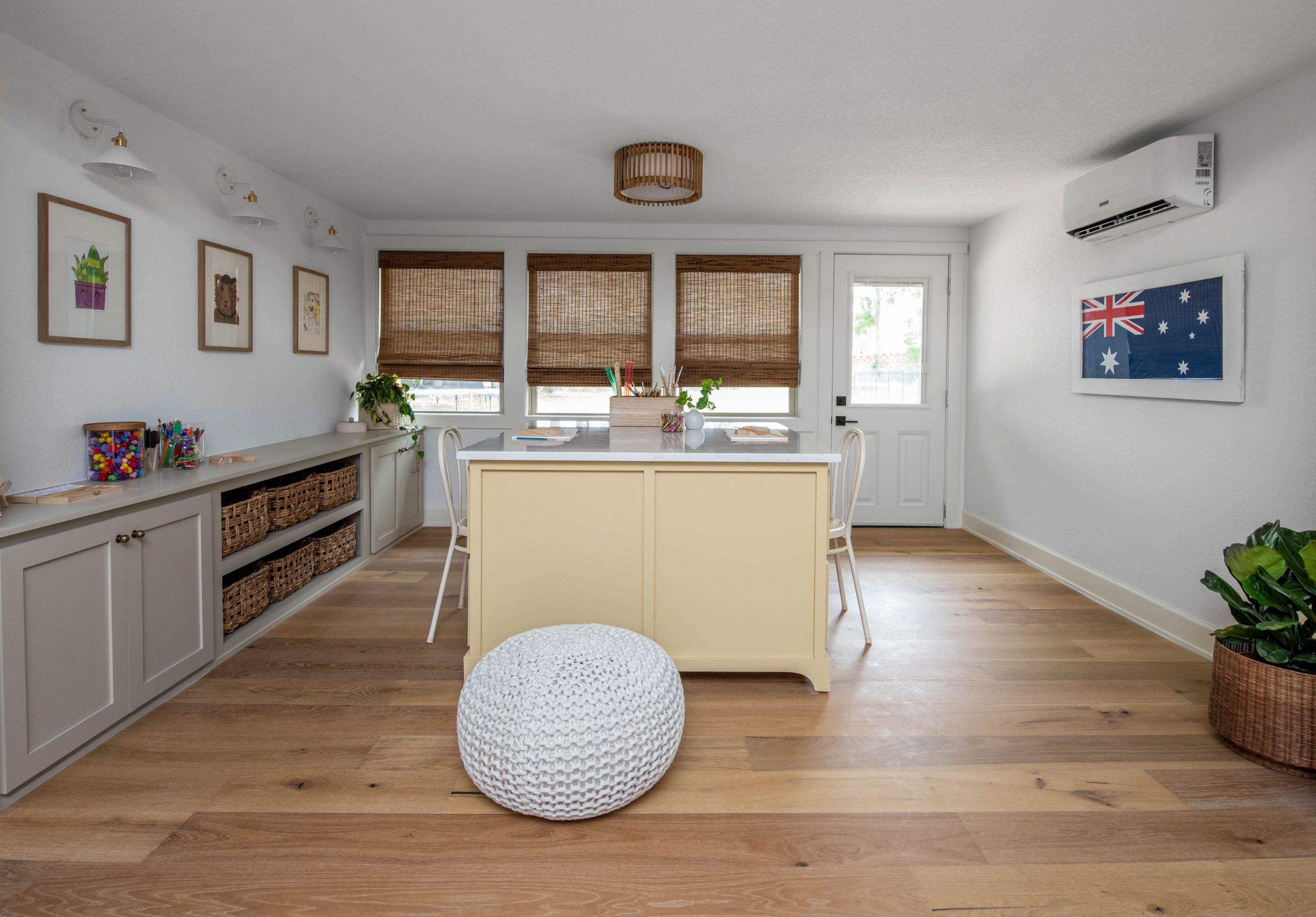 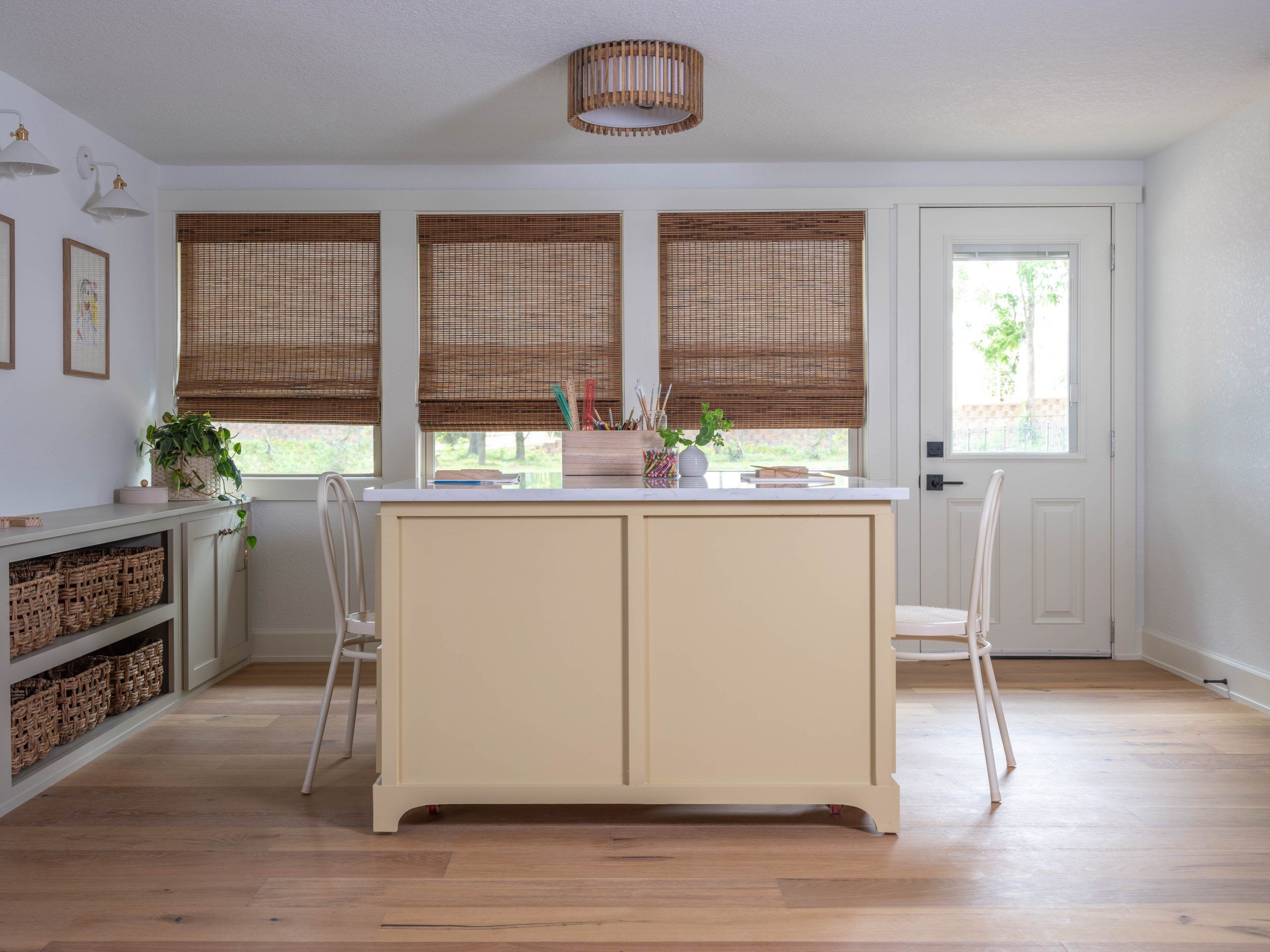 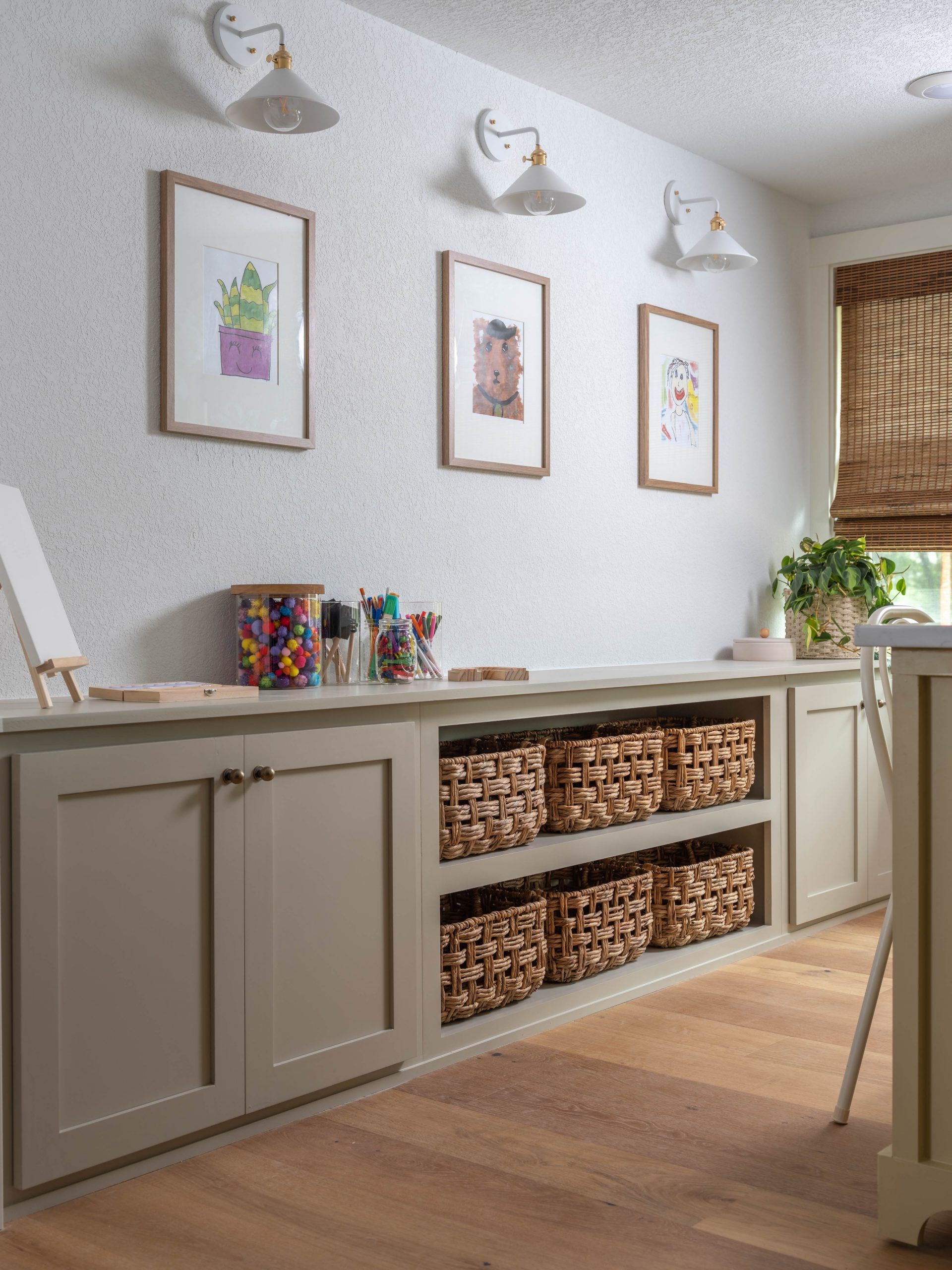 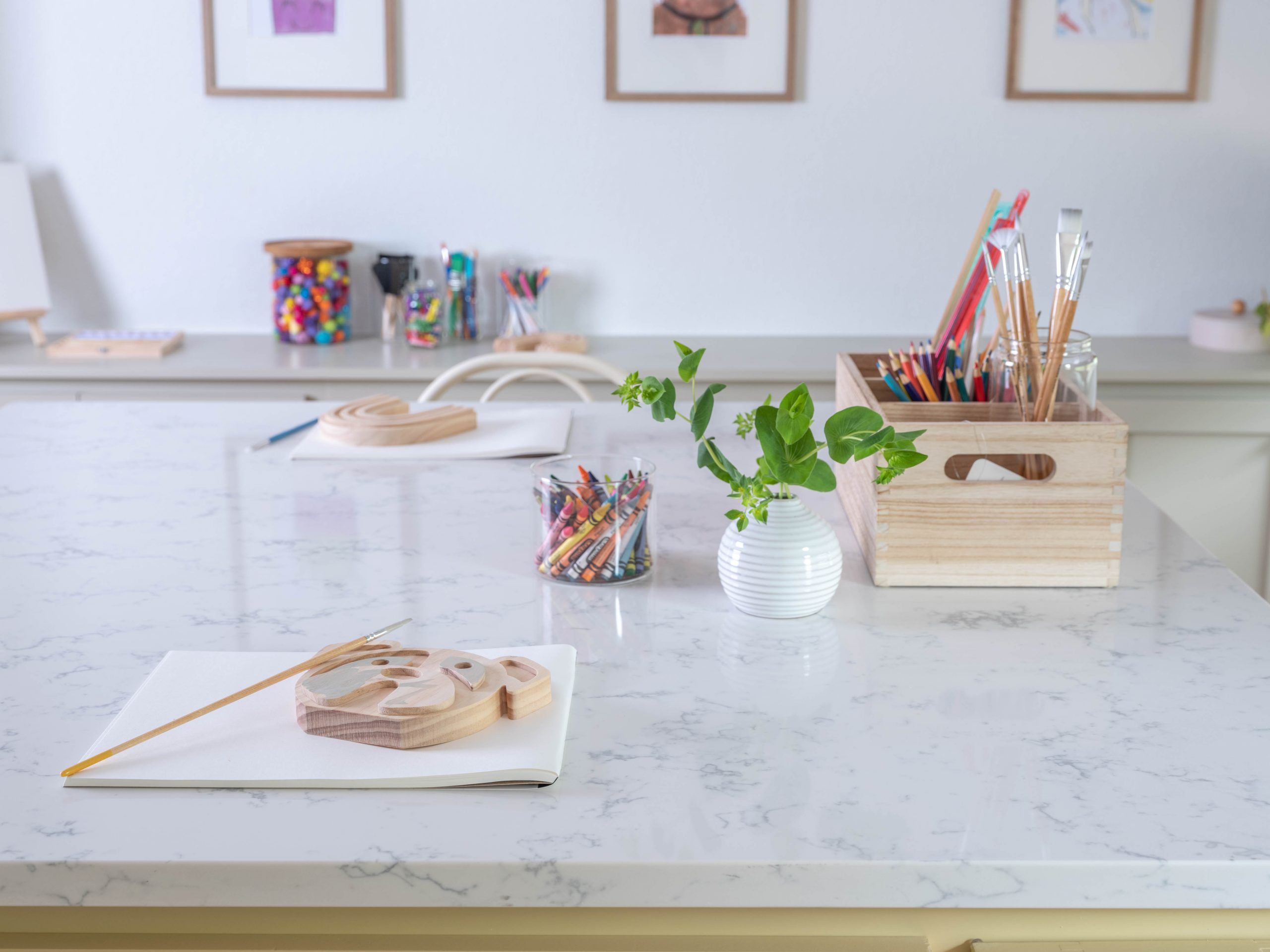 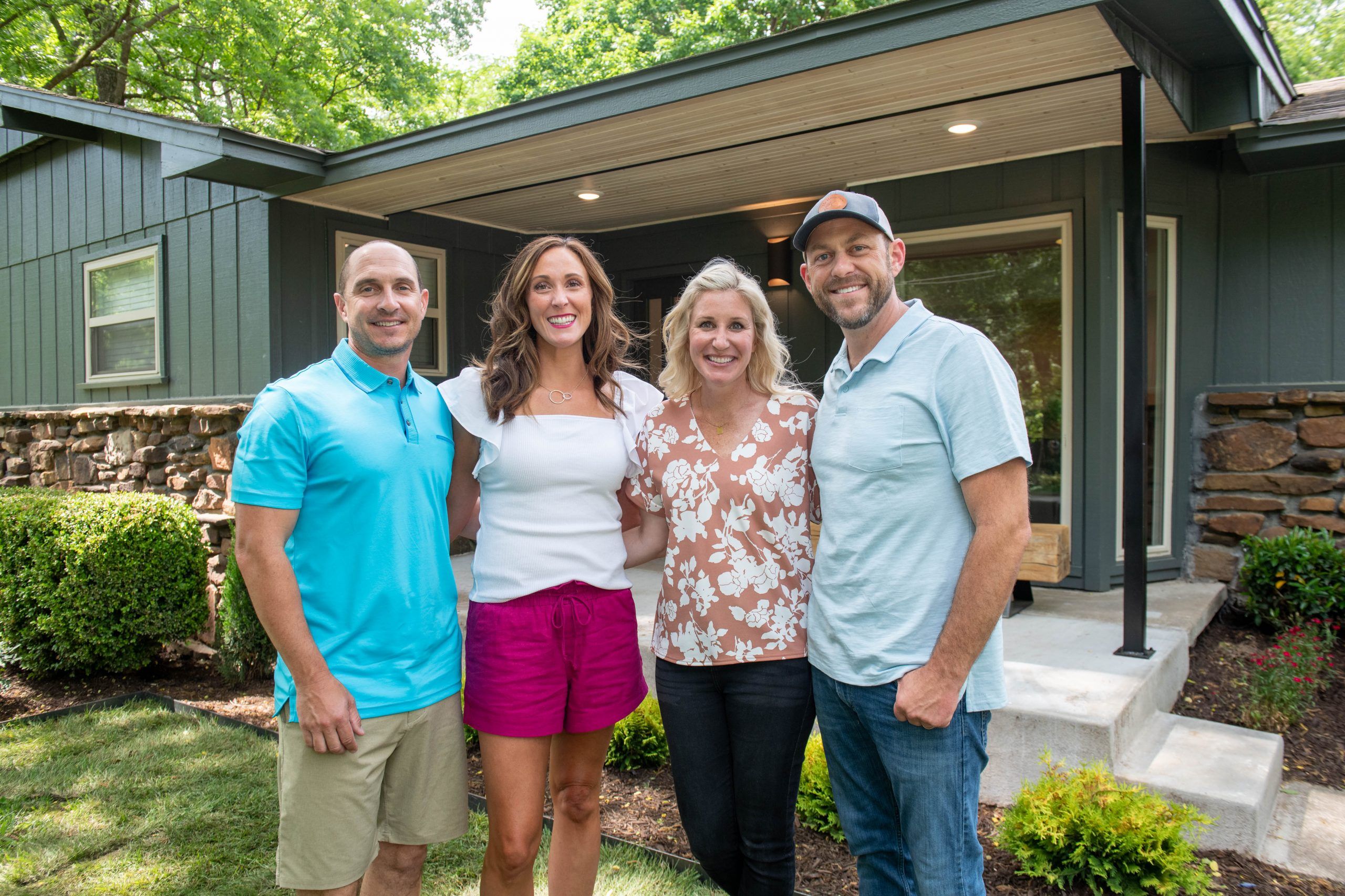