Written by Jenny Marrs on December 1, 2020. Posted in Fixer to Fabulous. 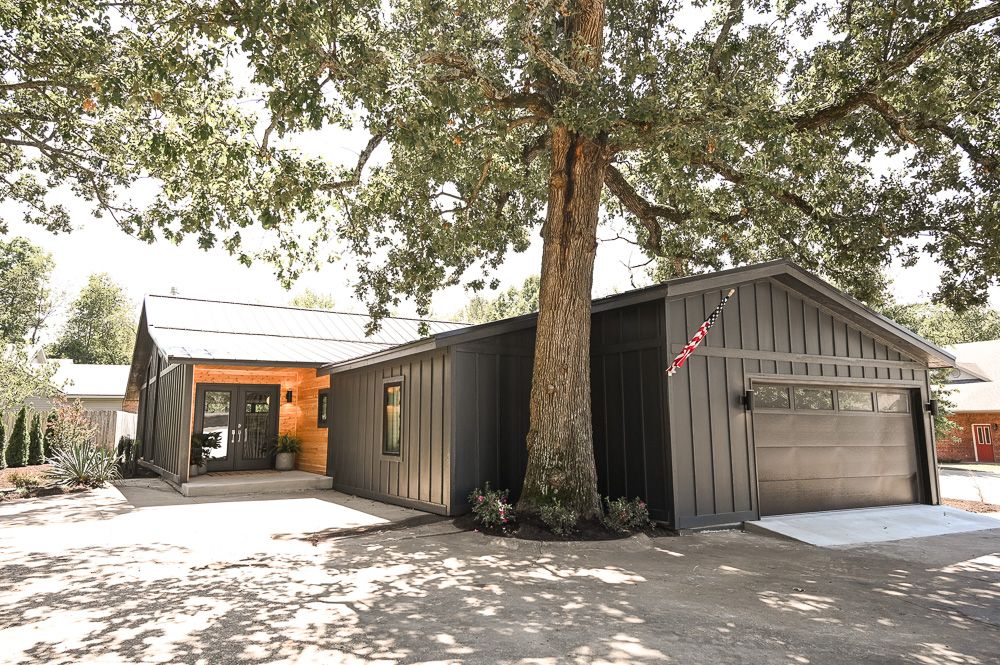 This was a really special one for us. Dave and I have known Phil and Jen Cristofaro for several years and we love the way they embrace life with enthusiasm and joy. They are extremely generous with their time, energy and resources and have pitched in many times to serve alongside us at The Berry Farm and throughout our community.
The crazy backstory here is that Jen and I had many conversations over the past couple of years about how she was feeling led to to sell their newly built dream home in order to downsize and serve the community in a new way. Obviously, that was a scary idea and she came to me because our family did something very similar when we sold our newly built “dream’ home downtown in order to move to the farm and launch our Berry Farm ministry. Jen’s reluctance to let go of the beautiful home they had built was driven by the memories her family and community had created in that place. Eventually, the decision was made for their family when Phil lost his job and they knew God was truly leading them to something new.
On the same day they closed on the sale of their home, I connected with Jen about another project we were working on and she also received a call from our production company about the Dojo they had recently purchased as an investment property. We had previously considered remodeling the Dojo for their family to rent out as an AirBnB and, consequently, the remodel didn’t qualify for the show (we work only on family homes). Our casting manager just happened to be checking in on Jen and Phil to see if their plans had changed by some random chance because we had a spot open for the next round of remodels for the show. The tears Jen had shed earlier in the day during the closing were now pricked with the slightest hint of excitement. Still rather reluctantly, Phil and Jen decided to go for it and transform the former karate studio into their new home. Jen admitted to me later that she didn’t expect to actually like the home but really wanted to try to create a space that would feel welcoming for their family and the the kids they serve in our community.
It turns out, Jen LOVES the former karate Dojo and she just launched her new ministry: For the Love NWA. Because their family stepped out in faith to start a new season of life, represented tangibly by physically moving into an unconventional home, they are now on mission to feed the hungry, cultivate community and fight poverty in our community. Pretty incredible stuff!
Now, let’s take a tour of this former Dojo…

BEFORE: An abandoned commercial building.

We transformed this inconspicuous, former dojo into a modern structure starting with new siding and a new metal roof. By adding a wall from the porch overhang down to the ground, we were able to encase the entry and skin the interior walls and ceiling with a natural wood ﬁnish. This became the main entrance for the home and the door by the garage was covered over (as to not create any confusion and allow for a large closet in their daughter’s bedroom). Strategic window placement and landscaping now obscures the surrounding homes while still providing ample amounts of natural light inside the home.

AFTER: A modern and inviting home.

BEFORE: An large open room and blank slate.

The beauty of this remodel is that we had an open canvas to work with. Once we established how we needed to break up the space, we were able to define where walls needed to be framed in and then we had to simply fill in the spaces (I say “simply” but it wasn’t very simple- ha!). Out of this one large room, we needed to create a living room, kitchen, dining room and master suite. Because Phil is from Brooklyn, NY, and both he and Jen like modern design, I wanted this home to be modern with industrial touches incorporated throughout to give it that NYC vibe.

The first thing we did in here was grind and polish the existing concrete floors in order to give them a nice sheen and finished look. Then, the new large scale windows went in to flank the fireplace and flood the space with natural light. And, finally, Dave created a focal fireplace with rolled steel panels that will naturally oxidize over time. Something you didn’t get to see on the show is that he stayed late one night to grind and buff the steel with car wax to make it shine! You can catch his behind-the-scenes video here.

AFTER: A modern, industrial space with a gorgeous steel fireplace.

We continued the industrial theme into the kitchen with a simple, yet practical and wide open kitchen – perfect for allowing large groups to gather. As a nod to the Cristofaro’s previous home (and their love for antique brick), we added a wall of veneer brick to give the illusion that this kitchen was built in a former warehouse. To continue the modern lines while allowing in natural light and maintaining privacy, we added windows above that stretch the width of the cabinetry.

AFTER: A city-style kitchen that is modern, yet warm.

While the brick wall adds color and texture to the kitchen, I wanted to add a little extra color into the dining room in order to balance all of the industrial modern features in the living space. So, I had a dear friend of the Cristofaro’s come in and paint a bright and bold mural on the dining room wall. The floral mural is a stark contrast to the muted colors and clean lines in the rest of the house and creates an unexpected statement in the open concept space.

AFTER: An unexpected and fun dining space.

We carved out an entirely new space within the open ﬂoor plan to allow for a carefully planned master suite. A true retreat, I focused on the materials and ﬁnishes to make this a one of a kind space for the Cristofaros. We created a large walk-in master closet (that you didn’t get to see on the show) and a bold and eclectic bathroom (this is one of my all-time favorite bathrooms!).

AFTER: An earthy and modern master suite.

BEFORE: An unused concrete slab.

Because there wasn’t a lot of outdoor space available, we wanted to make the most of what they do have! An existing concrete slab received a total facelift after I stenciled on a pattern to emulate the look of cement tile (that was a labor of love!). Tall fencing now completely surrounds the patio allowing for total privacy and Dave built a unique L-shaped bench that now extends the length of the patio and serves as seating for both the ﬁre pit area and the outdoor dining space.

AFTER: A warm and cozy outdoor space.

The girls rooms were simple to finish – new flooring and paint – but I really wanted to incorporate their personalities into the space with color and finishing details. I love how artistic and fun the entire Cristofaro family is and these girl’s rooms are just a sweet reflection of the Cristofaro girls!

AFTER: Unique spaces customized for the Cristofaro girls.

Another space you didn’t get to see on the show was the extra full bathroom we created out of a small storage closet. This bathroom now serves as a guest bathroom and a full bath for the Cristofaro’s two girls.

AFTER: A cute guest and girl’s bathroom.

I truly loved this project. It was creatively fulfilling and fun but it was also a real joy to do this work for dear friends of ours. They are such a bright, positive and joyful family and this home truly reflects that.

Thanks for touring the Cristofaro’s home with me!